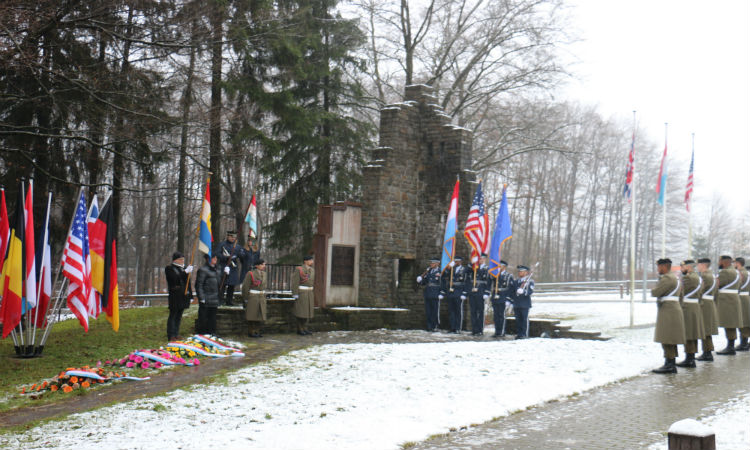 From December 15 to 17, 2017, the U.S. Embassy participated in several World War 2 commemorations, remembering the start of the Battle of the Bulge on December 16, 1944. Chargé d’Affaires, Kerri S. Hannan, who went to Schumann’s Eck National Liberation Memorial commemoration, advocated more collaboration between the nations. Public Affairs Officer, Daniel Pattarini, who went to Clervaux to attend the annual commemoration organized by the Commune of Clervaux and CEBA, emphasized the deeply rooted friendship between Luxemburger and Americans. Consular Chief, Chinwe Obianwu, who attended the commemoration organized by the Former Commissioned Officers of the Grand Ducal Guards at the American Military Cemetery and Memorial in Hamm, recalled the life of General Patton, Commander of the Third Army, who is buried amongst 5,076 U.S. soldiers. Regional Security Officer, Paul Hendricks attended the “Night Vigil” in Beaufort organized by the former non-Commissioned Officers of the Grand Ducal Guards and General Service Officer, Adam Lynch, attended the commemoration in Osweiler. Also present at each of these events were several members of the Embassy’s Marine Security Detachment.

For a compilation of photos from all above listed events, click here Flicker