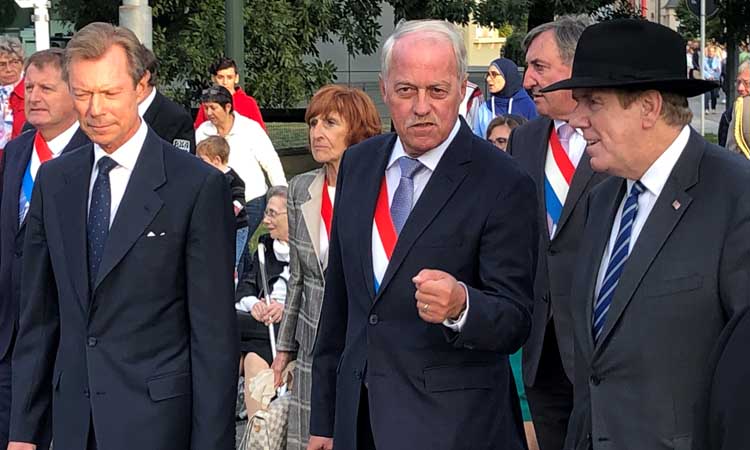 Last night, HRH Grand Duke Henri and U.S. Ambassador J. Randolph Evans met in the southern city of Pétange to celebrate its 75th anniversary of the liberation by U.S. troops and to commemorate the first U.S soldier, Hyman Josefson, to die by enemy fire on Luxembourgish soil. The Grand Duke was welcomed by a large, excited crowd, music, and Mr. Pierre Mellina, the Mayor of Pétange and Council of Aldermen, the President of the Chamber of Deputies Fernand Etgen and Luxembourg Minister of Interior Ms. Taina Bofferding. Also part of the commemoration were several WW2 resistance and commemorative associations including QUADRIGA, the largest historical military vehicle collectors in Luxembourg.

After Mayor Mellina delivered grateful remarks, all attendees were led by the local Grand Ducal Police Department, firefighters, regional music fanfare, and the WW2 commemorative associations through the streets of Pétange to the Hyman Josefson Square. There, a beautiful reenactment featured part of the historical events of Sept 9th,1944 of  Hyman Josefson, a Luxembourgish and a German soldier.

Following the reenactment, the Grand Duke and Ambassador Evans, together with all the dignitaries proceeded to the Hyman Josefson Memorial to lay down a wreath. The ceremony concluded with the Luxembourg and U.S. national anthems playing just as the sun set. The crowd was filled with young and old citizens, grateful of the sacrifice of these soldiers. It was also a blessing that relatives of Hyman Josefson made the journey from the United States to celebrate the commemoration.