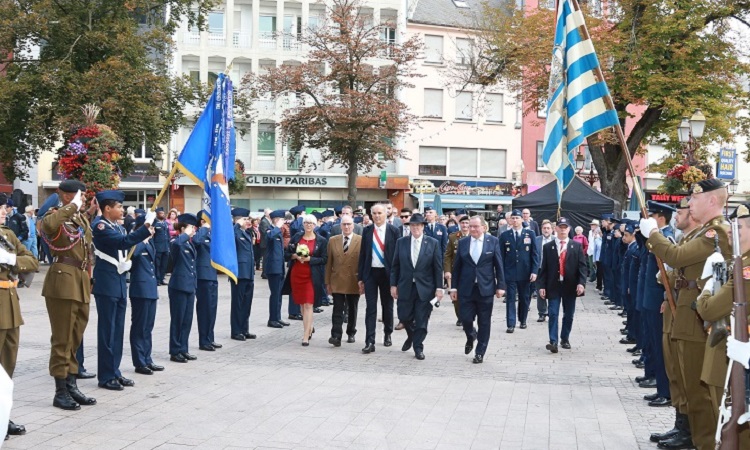 On Sunday, September 23 Ambassador Evans represented the United States at the 75th Commemoration of the Battle of the Bulge in the Luxembourgish city of Ettelbruck, which was famously liberated by U.S. General George Patton’s 80th Infantry Division in 1944.  Also known as “Patton Town,” Ettelbruck is home to the General Patton Memorial Museum, General Patton Square, and since the 1950’s has hosted annual commemorations known as Remembrance Day or Patton Day. This year’s commemoration, for the 75th anniversary of the Battle of the Bulge, drew a particularly large turnout.  Elaborate period-correct displays designed by museums from Diekirch, Clervaux, and Wiltz were supported by hundreds of fully-equipped WWII-reenactors from throughout the region, and a convoy of refurbished WWII-era vehicles.

Headlined Sunday by U.S. Ambassador Randy Evans, President of the Chamber of Deputies, Fernand Etgen, and Ettelbruck Mayor Jean-Paul Schaaf, the two day festivities included wreath-laying ceremonies to remember the U.S. soldiers who gave their lives in the Battle of the Bulge; the unveiling of a General Patton Memorial Plaque with General Patton’s granddaughter, Helen Patton; a refurbished Patton memorial; and marked with a military parade and concert featuring U.S. and Luxembourgish troops.

Ambassador Evans delivered well-received remarks at the wreath-laying in General Patton Square: “We have seen what tyranny and oppression can do.  It is up to us to pass on those memories as a vivid reflection of the reality of the moment -that they’re not distant vestiges of the past, to be studied in history books.  But, they are moments to be relived, and repeated, and shared, so that others may not share the pain that our parents and our grandparents had to endure.