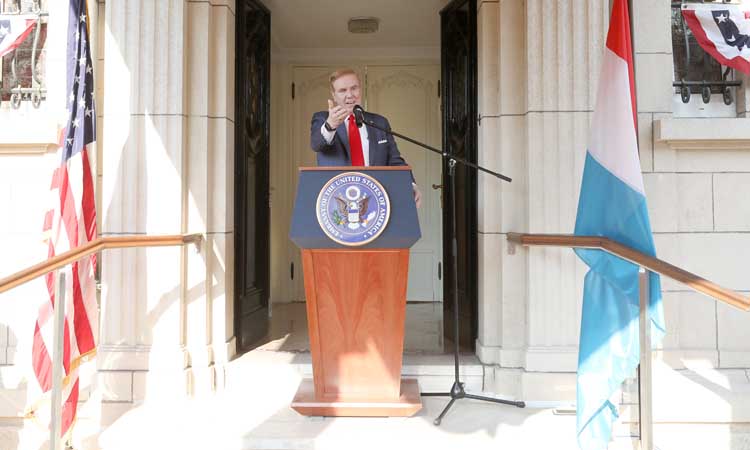 First of all, let me say that I’m as shocked as you are to be here, because it took me forever to get here. But I am so glad to be here, and it’s my great pleasure to bring to you greetings from the President, Vice President, our Congress and the people of the United States of America. I really want to express my appreciation to the Ministers who are here, to my fellow diplomats who have treated me far better than I deserve, who have kept me out of some embarrassing situations already. They have been great.

I welcome you here today to celebrate the 242nd anniversary of America’s independence. Just last night, I was at a dinner courtesy of my good friend the Ambassador from Turkey who was a wonderful host. There were those at the time who had thought we Americans had made a terrible mistake – when we had declared our independence and went our own way. But, as we can see from the world today, history judges things in a very different way than the reactions of the moment or even the reactions of a generation. I will not be the first to tell you that there have not been times that we have stumbled, but we have never fallen. And it’s because we have shared that common value of it since the freedom, and when freedom joins us together, it’s virtually impossible to tear us apart, as long as we keep our eye on the stars.

As you may know, I arrived in Luxembourg just last Monday to begin my tenure as Ambassador to this wonderful country, and I have to say it hasn’t rained since. I would love to take the credit as we Americans love to do, but the fact of the matter is I think that maybe it’s God’s way of shining down on the fact that I have my beautiful wife, Linda, and my nephew, Max, who have been here to help along the way. I did notice that when I did my credentialing and when I visited with the Prime Minister, I thought to myself they were both undoubtedly planning when they would ask me to leave because Luxemburg was back in need of rain.

Last Tuesday, I met with the Grand Duke for my credentialing, a truly impressive and inspirational leader who Luxembourg is so fortunate to have. The following day, I met the Prime Minister and many others in government. Tonight I have met with others in government.  Since then, Linda and Max and I, have been welcomed with open arms and shown incredible kindness by our new Luxembourg friends. I feel the genuineness of the emotions and I thank you for the warmth and the friendships, as these bonds were built from many challenges that we together have overcome during the years.

Together, as the Ambassador, we will nurture, strengthen and celebrate our important relationships. We will find common ground. We will work for new ideas. Our foundation is solid and grounded in a shared and sacred history bought with lives, but also with love, of many generations committed to freedom and democracy.

That sacred history includes the historic sacrifice of many who fought and resisted in World War I and World War II. Both of our countries know the huge cost of war and therefore the incredible price of peace. Our family, like so many here and so many of you who came through the line shared, have a personal connection to Luxembourg. My wife Linda’s uncle, First Lieutenant Richard P. LaFrance, fought to free Luxembourg during the Battle of the Bulge.  He survived the combat here only to be blinded while in action in Germany, just a month before the end of the war.  But like our countries and like our peoples, he did not stop. He did not quit. He came back to America and led a rich and powerful life, raising children and having a career that helped thousands of young athletes as a physical trainer at Cornell University.

While the story of Linda’s uncle Richard is similar to many others, there can be no doubt that, as Prime Minister Bettel noted last week, the lessons learned from these extraordinary moments in history are as real, as vibrant and relevant in our lives today as they were generations ago. Moreover, the institutions, many that are multilateral ones, created in the wake of WWII are living testaments to the fierce resolve shared on both sides of the Atlantic that a global war and a war in Europe must be made unthinkable to all future generations. In 1984, on the 40th anniversary of the D-Day landings President Ronald Reagan spoke eloquently of these lessons when he said:

“We in America have learned bitter lessons from two World Wars: It is better to be here ready to protect the peace, than to take blind shelter across the sea, rushing to respond only after freedom is lost. We’ve learned that isolationism never was and never will be an acceptable response to tyrannical governments with an expansionist intent.”

We are bound today by what bound us 40 years ago, the same loyalties, traditions, and beliefs. We’re bound by reality. The strength of America’s allies is vital to the United States, and the American security guarantee is essential to the continued freedom of Europe’s democracies. We were with you then; we are with you now. Your hopes are our hopes, and your destiny is our destiny.”

Because of our heritage, I found it odd that prior to coming over, that there were some who think the United States believe that multilateralisms have no place in the international scene.

I’m here to tell you today that nothing could be farther from the truth. Our commitment to many of these institutions like NATO, aimed at protecting peace throughout the world, are crucial to our collective effort. The United States is unwavering in its commitment to strengthening transatlantic ties particularly in light of challenges we face today. We fully support NATO and other core multilateral institutions that work to further the pursuits of security and peaceful conflict resolution across borders.

But, I would be remiss if I did not say, that as Albert Einstein famously said once: ‘Insanity is doing the same thing over and over again and expecting different results’. And as a result, what I bring to you is that expect imaginative, untried solutions, ideas that have not yet been perfected, but may yield or lead to unexpected results. After all, it was Ronald Reagan who stopped and stood, and said: “Mr. Gorbachev, tear down this wall.” Many in Europe thought he had lost his mind and others feared he had triggered a whole different type of tension in the world. And yet today, the wall is no more.

We talked a little bit about this last night, which is this: we are 18 years into a new millennia. We cannot continue to think of problems through the prism of an old millennia. What we must do is find the ways to keep the values that we believe by using the technology and the techniques and the policies that are different. We must ask ourselves routinely, is there another way, or should we simply repeat what we did yesterday, expecting a different result tomorrow. The truth of the matter is, is that it really is what brought me to Luxembourg.

Of all of the places in the world that I could come, I wanted to come here, because I saw people and I saw a land, where there many cultures, many opinions, many different people. But somehow at the end, they always found the consensus. They always found the resolve. They always found the ability to stay who they are to make it their motto. There’s a motto that I believe in, which is that we must retain our identity, keep our values, and protect each other. Thank you so much for being here tonight.

I know the sun is hot, that’s why there’s a bar and drinks. I also hope that some of you who I have not gotten to say hello to will come by and let me say hello, because I do want to meet every one of you. But I wouldn’t be doing my job, if I didn’t say one more time only this.

When I got here, Kerri was kind enough as the Deputy Chief of Mission to take me and show me around. And then she cast me out into the wolves of the diplomatic corps. And it was my good friends, like the Ambassador from Poland who made sure that I got on the right bus, and my good friend from the Czech Republic who made sure I knew to get off the bus. And my good friend from the UK who translated occasionally for me to let me know what was actually being said. Sometimes, I was a little red from it. But the one thing that I learned was everybody came together on National Day, and it made me very proud. I just want you to know, this is our national day, and we too, are proud.