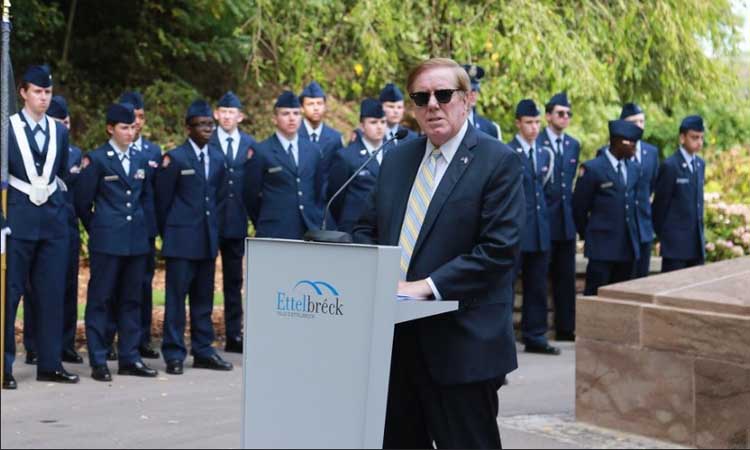 It is an incredible honor for me as the representative of the people of the United States of America to stand before you and thank you for joining together to honor a great general, a great moment, and a great victory.

Mr. President, thank you for being here.  Ms. Patton, thank you for being here; I’ve really enjoyed the opportunity to spend time together.  General Duschène, it’s always good to visit with you.  My lovely bride Linda is here.  For those who don’t know, the Ambassador’s wife is actually the brains behind the operation.  All I do is get the opportunity to stand before you at a moment like this.

There were those who gave their lives for liberation to help those who had been occupied.  19,000 Americans, over 5000 of them, laying right here in Luxembourg at the Luxembourg American Cemetery were killed.  Over 5000 Luxembourgers were killed during the course of World War Two.  Their heroism and their commitment, and their victory, should never be something that we take for granted or forget, because they paid the highest price that any human being could ever offer, or hope to give, for the purposes of liberty and justice, and freedom for others.

75 years though, is an enormous time to remember.  When we were at lunch, and I was talking with Ms. Patton, I said to her, my grandmother once said to me, “the difficulty of avoiding the same mistake is having the freshness of the memory.”  And my grandmother would say, “Because you never touch a hot stove twice.  Your son or daughter may never touch a hot stove once.  But your grandson, and your great granddaughter, and your great-great grandson might very well, because they never knew the pain of touching the hot stove once.”

We have seen what tyranny and oppression can do.  It is up to us to pass on those memories as a vivid reflection of the reality of the moment -that they’re not distant vestiges of the past, to be studied in history books.  But, they are moments to be relived, and repeated, and shared, so that others may not share the pain that our parents and our grandparents and our aunts and uncles had to endure.

We have to continue with all of our might, to remind, to refresh the importance of what happened.  I worry in today’s world that those lines get blurred – that somehow, we forget.

We forget that there were those who invaded, that occupied that murdered, that killed, that created concentration camps that set out to exterminate a people that wanted to eliminate the identity of Luxembourg.  Those are harsh, cruel words, I know.

And we must never let that die from the memories so that we can avoid it ever repeating.  It was brave Americans, like General Patton, who came, they fought, and they died – along with our allies, from many countries, who stormed the beaches at Normandy, who fought across the Rhineland, who pushed their way, all the way to Berlin.  It was Americans along with others who vindicated, freed, and liberated.

But I remember when I first came to Luxembourg, and I was visiting with average people, and they were telling me how fresh the memory was in their minds of the stories that they had been told by their parents and their grandparents and their relatives.  I remember them saying to me the beauty of America was not that America liberated Luxembourg once -in World War One.  General Pershing granting it by order, asking for permission before he would cross the boundary into the country.

They left a liberated and free Luxembourg.  Free to be all that Luxembourg could ever hope to be.

Carry that with you.  Share that with your colleagues and your friends and your children and your grandchildren.  To know that there are 5000 young men who lay in the Luxembourg American Cemetery as a true testament, a visual reflection, of the sincerity of our commitment to your freedom.  Because your freedom is the key to the world’s freedom.

When we let a democracy fall, when we let freedom fail to those who are oppressors, we inevitably ourselves suffer loss of some of our own freedom, and eventually all of our freedom.  So we must be continuously prepared to pay the price when those moments come along.  Europe itself is at the heart of our international Alliance system.  It’s our largest economic relationship.  There is no foreign policy that does not place at the forefront, our commitments that we have made to our allies.

But let me say one last thing, just so that there is no doubt in anyone’s mind.  Just as determined as General Patton was, right behind you standing here looking out on the horizon for the enemy, making sure that he was ever focused on protecting, we remain vigilant as well.  There will come moments when we will be tested.  There will come moments when we have to answer the call.  All that we must do is remember the sacrifice they made to have the courage to do what we must when the time comes.

Thank you again.  And let me say to you again.  It is the greatest honor I’ve ever had to be the Ambassador on behalf of my country and to be here with you in the Grand Duchy of Luxembourg. Thank you.