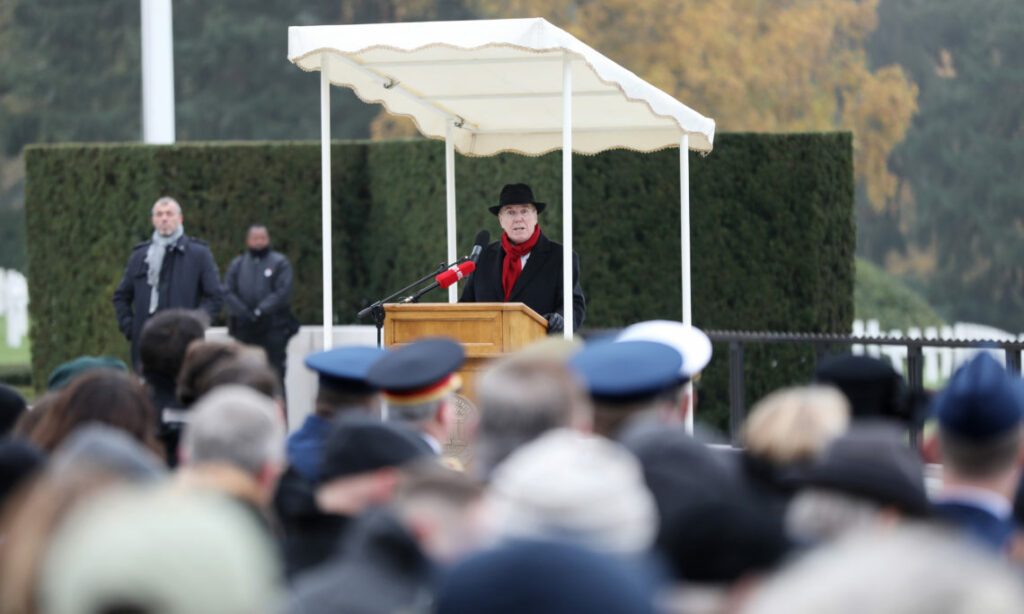 Good morning, good morning, and thank you. Thank you for coming. Thank you to our special guest, his excellencies, members of the diplomatic corps, Rear Admiral Zirkle, my lovely bride, Linda Evans, Mr. Minister Lex Delles from the Ministry of the Middle Classes and Tourism, members of parliament, Maurice Bauer from city of Luxembourg, Abbé CHINWE IROEGBU, representing the Archbishop of Luxembourg, veterans, Colonel Trimmel, and Sergeant Cates of the 52 Fighter Wing, members of the 52nd Fighter Wing, who’ve come here to help us today, Everyone from the Spangdahlem Air Base community, scouting groups, superintendent Jennifer Roman, and the cemetery and embassy staff.

Indeed, it is my great honor, in fact, I am humbled to be able to deliver remarks on this day in which we are gathered here to honor the veterans of the United States of America. We give thanks for their service and sacrifice. Including the service and sacrifice of those who could not be here with us today. These heartfelt sentiments are particularly important as we approach the 75th anniversary of the Battle of the Bulge. It was an event ….. (plane flies over)

Despite coming from many different backgrounds, we’ve gathered here today united, with a common purpose to remember the past in order to secure a peaceful future. I will take one moment to apologize to you because I know that coming into a cemetery such as ours greeted by circus is probably not what we would have expected, it isn’t something that I haven’t failed to raise and I will raise it again. But, I do apologize because that’s not what we are here for. We are here actually to honor a serious time. We have one job to do. We have one job and that is to remember the past so that the generations to come, secure a peaceful future for the generations that will follow. Now you might be thinking to yourself, that sounds great Mr. Ambassador, but how do we prepare at our cemetery and in the Grand Duchy of Luxembourg make sure we do that. The answer is quite simple. We must see, hear, feel, and remember.

My grandmother once told me about the story of the stove. And that is, if the stove is hot and you touch it, that generation will remember. Their sons and daughters will remember the stove is hot because they heard about it when they saw the scars that it left behind. Their grandchildren and grandchildren may remember about it. But after that, it is only up to those generations who fight to make sure that we remember because having not touch the stove itself, it is something that we must learn about hearing the testimonies and hearing the testaments of all of us, as we come here today to see the places that were long ago torn by war, to hear the stories of those who fought and those who suffered, to feel the emotions, the terror, the sorrow, the hope, the joy, we must become living testaments to the sacrifices that are required to secure freedom. And there is no better place to do that than in the Grand Duchy of Luxembourg.

A country occupied not once but twice during World War 2, liberated three times by the American soldiers including General Patton who is just here in front of us. I am often reminded by many, many Luxembourgers as I visit the country, that while they owe an unforgettable debt of gratitude for us liberating them from Nazi Germany, they too celebrate that fact that after the

liberation we left, we left them free people to decide its own destiny and to become what it is today.

It is a great honor to say thank you to our over 18 million veterans and those who are serving today to preserve a peaceful time.

It is an honor to stand here today and it is an honor to commemorate the veterans who have fought and died defending not just our world from tyranny to Luxembourg and Europe, but promoting world democracy. The last battle took place over seven decades ago in this beautiful country, but the battle goes on in other corners of the world. There’s one small faith it is important that we, especially now, pay tribute to the American heroes, to those who gave their lives to secure freedom, prosperity that we enjoy the benefits, the freedoms, for which they paid the price.

Today we give a special honor, and that is to honor two of our soldiers who have been recently identified and now get to go home. Private First Class Donald E Mangan who is memorialized on the Wall of the Missing here at our cemetery. He was from Elkton, South Dakota and was just 26 years old when he died. I am pleased to report that his remains have been identified this year and today, on Veteran’s Day, cemetery staff will place a rosette next to his name, to signify that he is no longer missing in action. Another hero was Lawrence E. Worthen who was also identified this year. He is memorialized on the Wall of the Missing at the Henri Chapelle American Cemetery in Belgium. He was from Santa Ana, California and was just 20 years old when he died. Both of these soldiers were reported missing on September 17th when they were attacked by enemy forces just days before the country of Luxembourg was liberated by American forces.

It is incumbent upon us to never forget, that in that war, there was good and there was evil. There was evil that wanted to deprive, to murder to kill, an entire generation, that wanted to dominate, that wanted to take away Luxembourg’s very identity. But today Luxembourg lives on, lives on a wonderful life. And we live with you. On behalf of the people of the United States of America I can say, thank you, to all those who are serving, have served and continue their sacrifice. If I could, please help me (plane)

We are here today for you. And we thank you for what you do and have done for our country. Together we all have a chance to reflect on our sacred past with the profound belief that, in doing so, together we are building a brighter, more peaceful future. Merci, thank you, and god bless the United States of America.