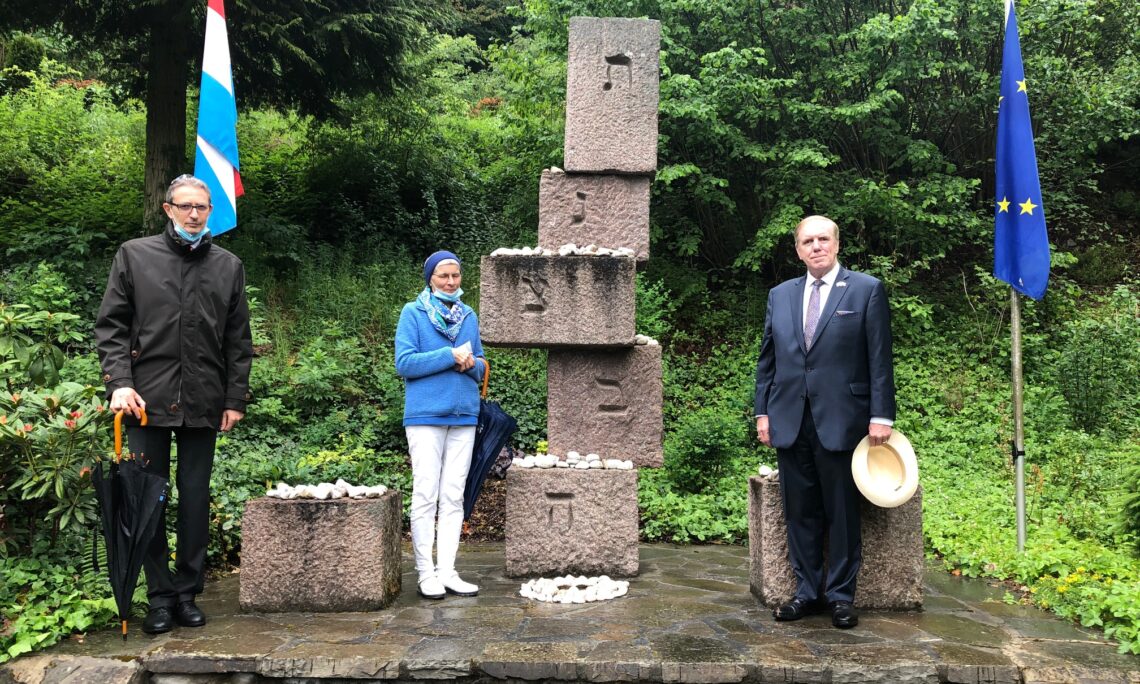 During my tenure as United States Ambassador to the Grand Duchy of Luxembourg, we have commemorated many, many days in which we – the Grand Duchy and the United States could take pride in a milestone of achievement or victory. These have included celebrating with Buzz Aldrin the 50th Anniversary of man walking on the moon or the 75th Anniversary of the Battle of the Bulge with heads of state, dignitaries, and survivors of that battle.

But not all commemorations reflect the culmination of victory or achievement, or even closure of open wounds that linger even today. Today is one of those days. It is notable that it falls during the same week as Solidarity Day as it marks one moral wrong on which solidarity of remedy has yet to come to bring the closure needed to move forward toward healing and true solidarity.

It thus marks a somber day in history – somber for the families of those on the trains; somber for a country itself – Luxembourg – that was a victim of Nazi occupation; somber for Holocaust survivors still in Luxembourg living with the memory of the fate the travelers on that train faced; and somber for all the rest of the world to know acts of such depravity were committed.

For that reason, it is important that we stop and remember what happened at Cinqfontaines. Seeing the walk the holocaust victims walked, the tracks carrying the trains of death, and the last places they would see on their way to such horrific endings.

“Never again” are just empty words without remembering the past as it actually happened so that the pain and cruelty is not dulled by time so as to permit it to take on a different character than it really was – immoral and depraved. By reflecting on the suffering endured during the Holocaust, we can remain fervent in our commitment to future generations that this kind of atrocity will never recur.

As Ambassador of the United States to Luxembourg, I have been honored to have worked so closely with the Prime Minister Bettel, members of the Government of Luxembourg and the local Jewish Community, among others, to resolve outstanding Holocaust Asset issues and to create the means for which the memory of those lost during the Holocaust can be remembered and honored.

While the Grand Duchy of Luxembourg could have hidden itself under the wrong it suffered as a victim of Nazi occupation, it has chosen to do more. It is consistent with the identity of this great country to lead even when others would follow, or stand when others would hide. The Grand Duchess Charlotte would be proud to see that her own country, notwithstanding the wrongs it suffered, nonetheless moves forward with the rest of the world to address an issue – the holocaust – so that its evil lingering effect is eventually extinguished by bold acts of good people doing the right thing.

The Government of Luxembourg under the exemplary leadership of Prime Minister Xavier Bettel has taken an active role in remembering the genocide of Jews by Nazi Germany and addressing the numerous injustices perpetrated against Luxembourg’s Jewish community by the Nazi civil administration.

In doing so, Prime Minister Bettel and others working with him never forget that Luxembourg itself suffered as well. But for the six million Jews sent to their deaths, and those shipped from Cinqfontaines, more needs to be done given the gravity of the wrongs committed as part of an attempted genocide of an entire people.

The creation in February 2019 of a working group addressing Holocaust issues is a great step forward and it is my understanding that the Government has outlined detailed, concrete steps to achieve resolution of the outstanding issues.

The sentiment found in the phrase “Never Again” drives our actions and propels us forward to resolve the last remaining issues from this great tragedy. Closure only comes with recognition of the wrong, restitution of that wrongfully held, and a commitment to document and preserve the evidence associated with it so that it truly never happens again.

To achieve this level of closure, we must all come together – the Government of Luxembourg, the Jewish Community, and other nations including the United States of American. Real closure involves four parts:

(i) finding the means in conjunction with this site to create a perpetual memorial, research center, and point of reflection to learn the who, why, how, and lessons history can teach from it;

(ii) committing to a process backed by evidentiary bases for determining (a) where restitution issues remain open including dormant accounts, insurance policies, and similar property right wherever they are, (b) who they belong to, and (c) how to return the proceeds to the rightful owners or those as appropriate under international and Luxembourg law;

(iii) remembering those who suffered here through a designated memorial reflecting the names those who are known and research those yet to be determined, so that families, relatives, and others can come an pay tribute to them and renew our collective commitment to never let this happen again; and,

(iv) a mutual recognition among all that the Grand Duchy of Luxembourg has, like others who were also victims, done its part for the collective good of our world to take affirmative steps to recognize and redress those legally and morally wronged with concrete steps to make sure it never happens again.

Now, let us come together in commemorating the memory of those who lost their lives by resolving this and all outstanding issues from the Holocaust with a mutual commitment of ‘never again.’