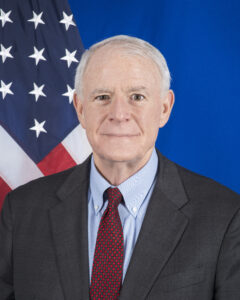 Ambassador Thomas M. Barrett was nominated by President Biden on August 25, 2021, to be the next U.S. Ambassador to Luxembourg. He was confirmed by the U.S. Senate on December 16, sworn in by Judge Lynn Adelman in Milwaukee on December 23, and arrived in Luxembourg on January 28, 2022.

He previously served as the Mayor of Milwaukee from 2004-2021, making him the longest-serving mayor of one of the 50 largest cities in the United States.

From 1993 to 2003, Ambassador Barrett was elected to serve five consecutive terms in the U.S. House of Representatives. While in Congress, he was a member of the Committee on Energy and Commerce, as well as the Banking and Financial Services, Government Reform and Oversight, and Judiciary Committees. From 1989 to 1993, he was an elected member of the Wisconsin Senate, and of the Wisconsin State Assembly from 1984 to 1989.

Before being elected to serve, Ambassador Barrett worked in a private law practice and as a bank examiner for the Federal Deposit Insurance Corporation. He started his career in 1980 as a law clerk for the Honorable Judge Robert W. Warren on the United States Federal District Court for the Eastern District of Wisconsin.