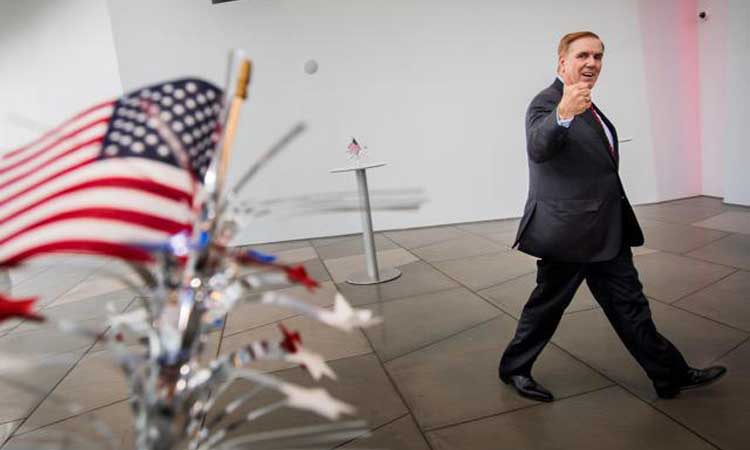 US ambassador Randy Evans in typically positive mood as he arrives for the Independence Day celebrations on 3 July (Photo : Nader Ghavami)

The visit of Buzz Aldrin, signing a space MOU and getting a working group launched to tackle Holocaust victim restitution issues were the highlights of Randy Evans’s first year in Luxembourg.

Before heading off to the States for a brief summer break, US ambassador to Luxembourg Randy Evans spoke about his first year in Luxembourg and the achievements the embassy had made.

While the recent visit of Apollo 11 astronaut Buzz Aldrin was an undoubted highlight that grabbed media attention, Evans says that the establishment of the Holocaust victim restitution group “was just as important.” The US special envoy for Holocaust issues, Tom Yazdgerdi, was in Luxembourg in February to help launch the working group between the Jewish community and the Luxembourg government focused on restitution issues. He visited the grand duchy again in June. “Knowing that we were committed and working to get an agreement with prime minister Bettel, that said that this isn’t something we were going to let languish. It’s a big deal.” Evans explains.

The ambassador also treasures the times he has been out to the American military cemetery in Hamm and recognising how many Luxembourgers take time to honour the fallen soldiers. “Every day I thought I was having a bad day, I would get in the car, have the driver drive out to the cemetery, walk around for a minute and realise what a bad day is.”

Evans admits there have been ups and downs, agreements and disagreements during his tenure so far. “But at the end of the day we’ve made a lot of progress for our embassy and I’m very proud of my team.” Indeed, he jokes that although a lot more people know who he is since Buzz Aldrin visited, it was a team effort.

MOU transparency and more to come

Aldrin’s presence at the embassy’s Independence Day celebrations also marked the 50th anniversary of the Apollo 11 mission, the first to land men on the moon. Several guests at the celebrations were surprised to be handed a commemorative version of the Memorandum of Understanding between the US and Luxembourg governments on space, which was signed by minister of the economy Étienne Schneider and US secretary of commerce Wilbur Ross on 10 May. They thought the MOU had been kept secret until then. But Evans explains that the embassy had actually posted the entire document on its website and had sent the commemorative version to the entire diplomatic corps in Luxembourg. “The commemorative version was the only way I could get my signature on it,” he jokes.

While the Luxembourg government seems reluctant to share MOUs publicly, the US had “been pretty clear from the get-go that we weren’t going to agree to a confidentiality agreement” regarding the space document. “Transparency is a very important thing, but independently we have a freedom of information act requests…all these things that attach the moment you make anything secret.”

Evans says that the US work on the MOU was complicated and involved check offs from Nasa and the White House and several other agencies as well as the department of commerce. There was a certain amount of discretion during the negotiation process, but the ambassador recalls that the whole thing started over a lunch with Étienne Schneider in which they developed the outline of what both sides needed on the back of a menu. “What impressed me most from the Luxembourg government was that a “no” was a no and “yes” was a yes. And that is an important thing. You have to have a level of confidence when doing a deal like that.”

The ambassador is confident that more bi-lateral agreements are likely to be developed down the line. “With this memorandum of understanding in place we have a platform where we can be much more helpful to the grand duchy, and to industry in the grand duchy. But in order to do that we have to document these things.”