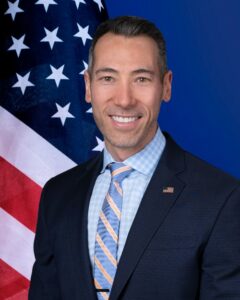 Michael Konstantino arrived in Luxembourg in June, 2022 to begin his current assignment as the U.S. Embassy’s Deputy Chief of Mission.  After the Ambassador, Michael is the highest-ranking officer at the Mission, carrying the diplomatic rank of Counselor of Embassy.  A career Foreign Service Officer with over 21 years of experience, he was last the Deputy Director of the Office of South Central European Affairs, the desk for the seven countries of the Western Balkans at State Department headquarters in Washington, D.C.  His previous assignments include a mix of management, economic, political, and consular work in Skopje, Frankfurt, Cotonou, Tel Aviv, Gaborone, Port-au-Prince, and Washington, D.C.

Michael was President of the 1200+ member employee association glifaa (previously, Gays and Lesbians in Foreign Affairs Agencies) from 2021-2022, and has twice served on the organization’s board at other times.  He has been passionately involved in State Department Diversity, Equity, Inclusion, and Accessibility efforts.

Michael graduated from Tulane University with a B.A. in Political Science and from the West Chester University of Pennsylvania with an M.B.A. and Certificate in Business Analytics.  He speaks French, and some German and Hebrew.  Michael is a native of Los Angeles, but called New Orleans home before moving to Washington, D.C.  His husband, Shalom, is a Public Affairs Specialist at the State Department.