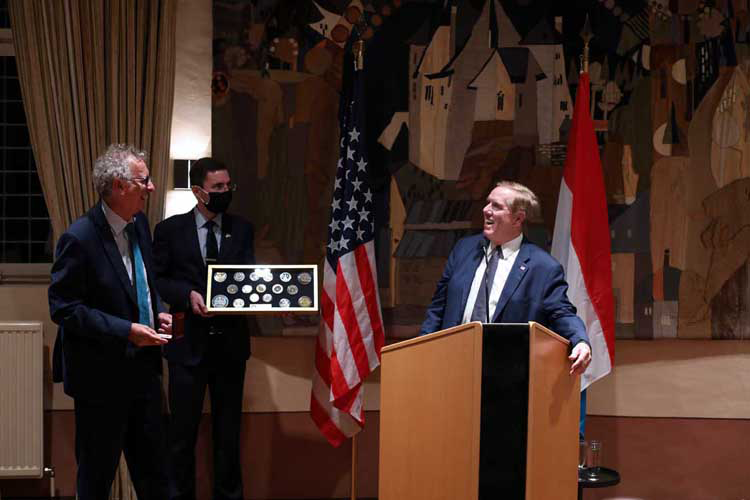 U.S. Ambassador to Luxembourg, J. Randolph Evans and the Chiefs of Missions from across Europe were honored to be hosted by Luxembourg Deputy Prime Minister François Bausch, Minister of Finance Pierre Gramegna, and Minister of the Economy Franz Fayot for discussions at Bourglinster Castle on September 23, 2020.

“Ministers Bausch, Gramegna, and Fayot have been great partners and advocates for the Luxembourg – United States relationship. Minister Gramegna has helped enhance our financial links through recent initiatives like the ratification of the tax treaty protocol. Minister Fayot has seized the mantle to grow our relationship further in the Space sector, among other promising economic growth areas.  Deputy Prime Minister Bausch has likewise been a strong partner, from his work launching a Defense Working Group on Space, trips to see his counterparts in Washington DC, extending Luxembourg’s support for the U.S. Air Force Warehouse Facility in Sanem, and establishing a new public bus service to the Luxembourg American Cemetery. It is an honor to be hosted by these great friends and partners and joined by many other leaders in the U.S. and Luxembourg governments.”

“I believe that defence has to cope more and more with a wider spectrum of threats: the traditional military ones, terrorism up to a certain extent – this is why my country deploys troops to Mali in Africa – cyber security, environmental threats like climate change which will shape defence over the next decades and pandemics as we have just seen.”

“Luxembourg and the US are strong historic partners that have been working together over many decades to enhance prosperity through exchange and trade. Our two countries enjoy long-standing relations in the area of financial services and the presence of US financial institutions have played a major role in the internationalization of the Luxembourg financial center since the 1960s. Luxembourg is today a trusted partner of the US, in particular for US banks, insurers, asset managers and FinTech companies aiming to serve the EU market. Together with Ambassador Evans and the US Chief of Missions from across Europe we had excellent discussions on how to further strengthen these relations.”

“The Grand Duchy attaches great importance to its economic, political, academic and cultural bonds with the U.S. Both countries share a common history, a common present and a common future. Whether it is the terrifying experience of the Battle of the Bulge during the World War II, the many Americans of Luxembourg descent, our vital commercial partnership through the mainly industrial American companies located in Luxembourg, the sharing of common values or the nascent cooperation in the Space sector, all these elements give our friendship a solid foundation to ensure a bright future.”