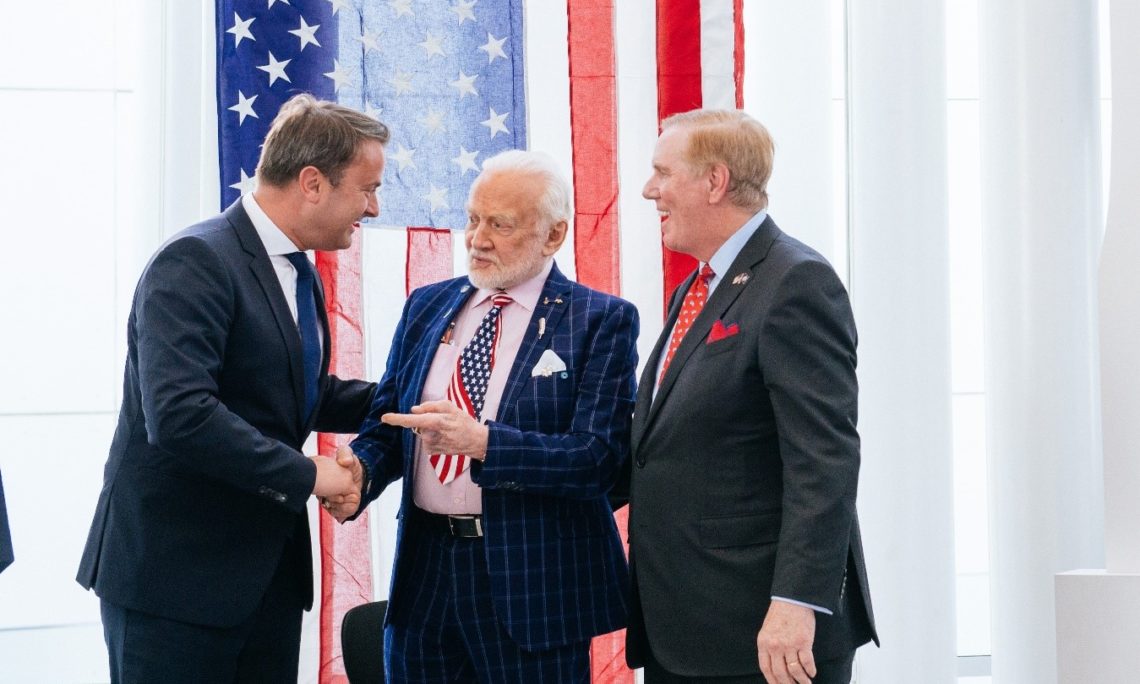 It was a milestone year for the U.S.- Luxembourg relationship, not only because we honored the sacrifice of 75 years ago that proved vital to preserving our freedom, but also because we achieved numerous successes that will grow our relationship in several fields including space, defense, finance, and trade.  These milestones and successes attracted a steady stream of unprecedented visits by U.S. leaders and public icons including Secretary of Commerce Wilbur Ross, Secretary of Defense Mark Esper, Speaker of the House Nancy Pelosi, and the second man on the moon, Buzz Aldrin. As the new year dawns, U.S. Embassy Luxembourg is proud to highlight the successes and milestones of the bilateral relationship in 2019: New Frontier of Space

Seizing the New Frontier of Space

A landmark year for Luxembourg and the United States’ collaboration in Space, the Embassy was pleased to welcome Commerce Secretary Wilber Ross in May to sign the Memorandum of Understanding (MoU) between the U.S. and Luxembourg on Space, which forms the platform for increased collaboration across a wide range of space activities, including research, exploration, defense, and space commerce.  As such, it covers the broadest possible scope of space activities to be undertaken by the two countries as an important next wave of economic growth. New Frontier of Space

As a first step following the MoU, U.S. Secretary of State Mike Pompeo and Commerce Secretary Wilbur Ross were proud to welcome Deputy Prime Minister Etienne Schneider to Washington, DC, where he participated as a speaker for a historic SPACE Enterprise Summit (June 2019) to promote innovation and investment in the commercial space industry.

Solidifying a longstanding relationship between Luxembourg and the United States for their mutual security and defense cooperation, Ambassador J. Randolph Evans and Minister of Defense Francois Bausch signed a significant and long-awaited agreement for the continued operations over the next 10 years of the U.S. Air Force warehouse facility in Sanem. MOU

Secretary of Defense Mark Esper and Luxembourg Minister of Defense Francois Bausch, in December on the margins of the Battle of the Bulge Commemoration in Luxembourg, took the opportunity to confirm the advances in our defense relationship this year and to commit to seek additional opportunities to strengthen our defense cooperation. Esper Bausch

Luxembourg and the United States further consolidated our financial ties, when Ambassador J. Randolph Evans and Minister of Finance Pierre Gramegna brought a new Taxation Protocol into force in September.  The new Protocol, which amends our Double Taxation Convention, provides for the exchange of information between our governments that follows the approach of the U.S. model income tax treaty and the Organization for Economic Cooperation and Development (OECD) Model Tax Convention on Income and Capital. New Tax Protocol.

As Luxembourg took on the chairmanship of the International Holocaust Remembrance Alliance (IHRA) in 2019, the U.S. Embassy was proud to showcase support for the Grand Duchy in this leadership role and encourage Holocaust restitution initiatives. The U.S. Special Envoy for Holocaust Issues visited Luxembourg four times over the course of the year and helped to launch a new working group between the Jewish Community and the Luxembourg government focused on restitution issues. Lux Chair of IHRA.

Ambassador J. Randolph Evans and many visiting U.S. leaders were proud to participate in numerous heart-felt and community-led events across 2019 that paid tribute to moments of shared Luxembourgish and American history – commemorating the 75th Anniversary of the Battle of the Bulge and honoring those soldiers, citizens, and unique individuals who made a difference throughout WWII.

For example, 2019 marked the second Christmas since the passing of Cpl. Richard Brookins in October of last year, the “American St. Nick,” and Ambassador Evans was proud to join the town of Wiltz and the Brookins family to celebrate the memory of this American soldier who brought unexpected cheer to the Occupation-wearied Wiltz by dressing as Saint Nicholas in December 1944, famously returning to the town many times thereafter. American St. Nick

The Ambassador and his wife Linda were also grateful to join the village of Munshausen to participate, in the presence of HRH the Grand Duke, in the “living history” of Thanksgiving Day 1944/2019, an incredible event that recreated a U.S. Army Camp in 1944 – complete with an original U.S. Army field kitchen – to creatively mark the events surrounding the 75th Anniversary of Luxembourgish liberation from Nazi occupation. Thanksgiving 75th

The Ambassador also joined Luxembourgers in paying tribute during the Ettelbruck Remembrance Day 75th Anniversary, the first Liberation of Luxembourg Commemoration in Pétange, and via the Keystone in the Way initiative in Clervaux, to the 28th U.S. Infantry Division that fought and significantly disrupted the enemy during the first days of the Battle of the Bulge. Ettelbruck Remembrance

These solemn commemorations and many others crescendoed into a momentous ceremony for the 75th Anniversary of the Battle of the Bulge at the Luxembourg American Cemetery on December 16.  His Royal Highness the Grand Duke, Ambassador Evans, a U.S. Presidential Delegation led by Defense Secretary Esper, Speaker of the House Nancy Pelosi, 16 members of Congress and many other dignitaries joined over 1000 attendees to honor the fallen and living heros of the defining battle that changed the tide of World War II and ensured our freedom, our prosperity, and our enduring partnership. 75th BoB.