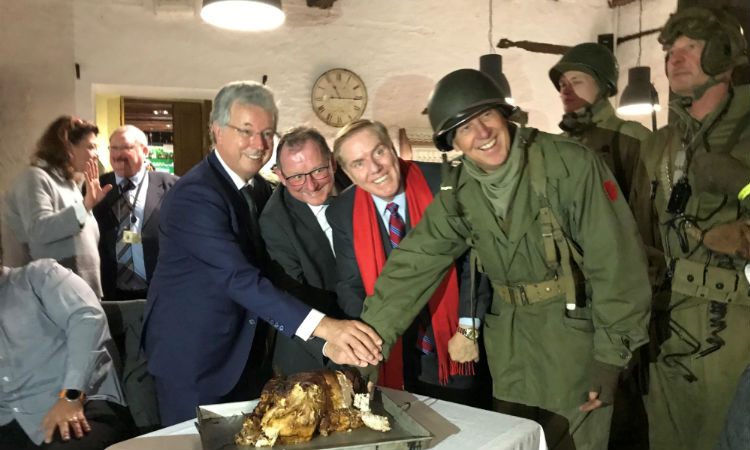 This past Saturday, we celebrated the 75th Anniversary of the Thanksgiving Dinner of 1944 between US troops and Luxembourg citizens in Munshausen. This event celebrates a unique shared memory between the United States and the people of Luxembourg. As we approach the Thanksgiving holiday, we are grateful for this strong bond between our nations.

The city of Munshausen celebrates this great feast by transforming the city and reenacting the events of 1944 and visitors are truly transported to another time. Ambassador Evans and representatives from the Embassy were joined by HRH the Grand Duke Henri, Mayor Eicher of Munshausen, President Fernand Etgen, and General Duschène.

In November 1944, the village of Munshausen became a U.S. Army camp and billeting area. The Soldiers belonged to the 28th Infantry Division.  Regular village buildings became the Military Head Quarters, medical aid station, a field bakery, and an APO Military Post Office.  The sawmill, just outside Munshausen, was used by the Army as well.  Many men slept in their tents in the camp, but quite a few also stayed with civilians.

The insignia of the 28th Infantry Division was: the “red key-stone.”  The Germans, however, nicknamed it the “bloody bucket.”  They had just fought a fierce battle in the Huertgenwald Forest, Germany, led by General Norman Cota. They were stationed in Munshausen to regain strength, both physically and mentally. Many new recruits arrived from the U.S. in response to the casualties of the battle and veteran soldiers trained these fresh soldiers in Munshausen.

Despite the pressures of war, there was time to play games, read letters, and have a bit of fun in the village. At Thanksgiving, the Soldiers and the people of Munshausen came together for a real feast! Turkeys and treats were flown from the U.S. and shared amongst the Soldiers and the villages. It was a great celebration that forged a great bond we continue to celebrate 75 years later!