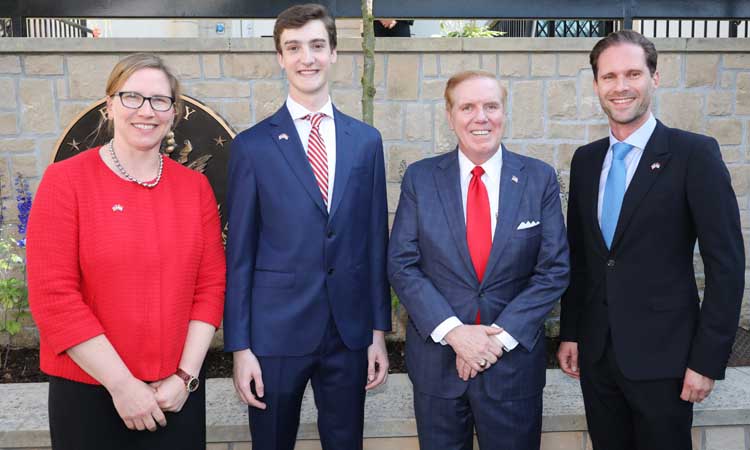 On June 28th, 2018, the U.S. Embassy Luxembourg hosted its annual Independence Day reception celebrating 242 years since the signing of the Declaration of Independence. The theme of this year’s reception was “Journey Across America” featuring vintage posters of each unique U.S state, a large pin-board for guests to mark their favorite city, traditional foods and drinks from the different regions, and live band performing a medley of some of America’s greatest hits.

In attendance were Luxembourg government officials, including ambassadors from England, Germany, Japan, Turkey, and Czech Republic, as well as representatives from government departments, trade associations, and businesses in Luxembourg. After the presenting of the colors by the Embassy’s detachment of U.S. Marines, local choir students from Lycee Aline Mayrisch and the International School of Luxembourg sang both the Luxembourgish and American national anthems. After, Ambassador Evans addressed the crowd with his remarks which honored the bravery of the troops in WWII and stressed the United States’ unwavering commitment to NATO and other core multilateral institutions that work to further the pursuits of security and peaceful conflict resolution across borders. Ambassador Evans included a powerful quote from President Ronald Reagan, who said, “The strength of America’s allies is vital to the United States, and the American security guarantee is essential to the continued freedom of Europe’s democracies. We were with you then; we are with you now. Your hopes are our hopes, and your destiny is our destiny.”

After the ceremony, guests enjoyed the live music, delicious desserts, and left the embassy with a gift that encompassed the “Journey Across America” theme, consisting of peanuts from Georgia, jelly beans from California, saltwater taffy, and patriotic luggage tags.