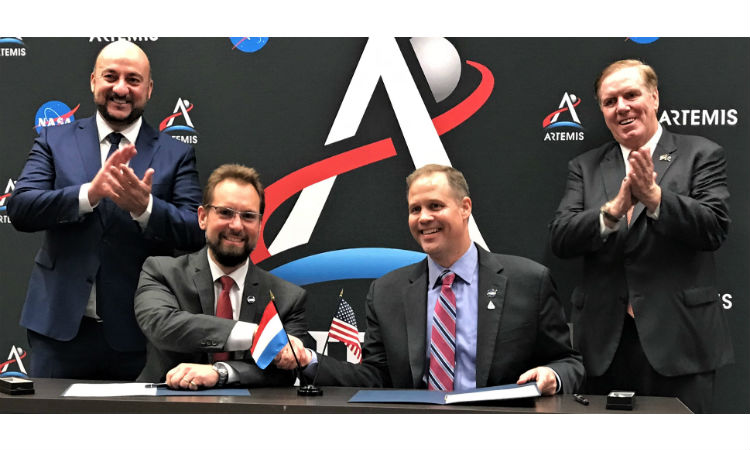 The United States Ambassador to Luxembourg, J. Randolph Evans, is pleased to announce the National and Aeronautics and Space Administration and the Luxembourg Space Agency signed a Joint Statement of Intent in Washington, D.C.

“NASA and the Luxembourg Space Agency launched new cooperation on the margins of the International Astronautical Conference during a celebratory event that I was pleased to join.  The two agencies signed a Joint Statement of Intent to pursue further collaboration and a Framework Agreement.  This is another step forward in the cooperation we envisioned as part of the Space Memorandum of Understanding signed on May 10, 2019, which established a more formal exchange of information between our two countries to facilitate research, exploration, development, and use of space, as well as the continued growth of our respective space industries through new commercial and investment opportunities.  The entire U.S. Embassy team has been working hard to facilitate continued progress, like this, in our space cooperation.  Congratulations to both the LSA and NASA.”

In the joint statement of intent, Bridenstine and Serres identify several potential areas for future cooperation, including space applications, space exploration and utilization, sharing of scientific data, and education, while agreeing to pursue a Framework Agreement to facilitate further collaboration between the two agencies.

Please find attached the full text of the NASA/LSA Joint Statement (PDF 293 KB), as well as photos of the signing ceremony in Washington, D.C.