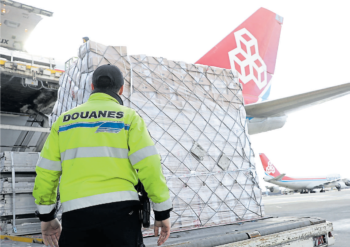 Customs control at cargo center: Thanks to the quick assistance of WSA,
CFL cargo, the port of Mertert, and the army, air cargo traffic was saved from a collapse.
Cargolux currently carries 120 weekly flights, 20 percent more than usual.

The call from the crisis session arrives at half past eight. It is on March 24; the Corona Pandemic had also hit the Findel airport. In the LuxairGroup Cargocenter there, the hub of the country, where on a normal day work about 1,300 people. Right now there is a staff outage of 40 percent. Here, freight traffic runs at full bore. Bulk deliveries with medical material from Chinese Zhengzhou were expected. Laurent Bodson, Director General of the Warehouse Service Agency (WSA) in Sanem, picks up the receiver. On the other end is the Ministry of Defense. The airlifts from China and Luxembourg are under massive pressure. “If the Cargocenter is not working anymore, Luxembourg does not work anymore.” Bodson understands the telephone call. The Cargocenter urgently needs staff, masks, gloves, but can also accept food and logistics. Bodson has these people. ‘I’ll send a list tomorrow” he said by phone. “Tomorrow is too late. It must be now,” The Cargocenter is the heart of the Luxembourg economy, which must be taken care of. While passenger traffic came to a halt, freight traffic grew around 20 percent.  120 weekly flights came to Cargolux through the end of March. Bodson drives to the office straight away, sets up a list of their members together and sends them to the Ministry. Later in the evening, he writes the commander of the US Air Force. The Luxembourg Ministry needs his people, but they work for the American Air Force. If he wants them at the Cargocenter in this emergency, Bodson needs the consent of the Air Force. “Go for it!” he reads a little later on his cell phone screen.  The US Air Force is the biggest customer of the WSA. In the Sanem warehouse resides war reserve materiel, so vehicles and tent cities, no weapons and no ammunition. The WSA stores the material and maintains it. This is how the employees supply the support point in Ramstein on the edge of the Pfälzer woods, where the US Air Force has stationed the 86th MMS. In such a sensitive facility as WSA, there was no shutdown. On March 16, one half of the staff remained in Sanem, the other half sent home. “I have to protect my people so they are fit when you really need it, “Bodson explained. This is the case on March 24th.

At Cargocenter: Collapse is looming

In the morning after the phone call, on March 25, Bodson stands ready next to the CEO of Cargocenters in Findel to discuss the details. He wants to make sure employees are protected from the virus when they work here. When entering the area, Bodson was shocked. Everything is clear. Safety wise, the floor from top to bottom, is covered with packages and pallets. “There was no free space anymore, just everything was full! Then it became clear how much our collaboration was needed.” The time pressure is huge. Those from Bodson’s team sent home because of the Corona- Pandemic sent home were ready. “Our people had to, within an hour be individually ready.” One day later, on the 26th of March, 36 people arrived from the WSA warehouse to the Cargocenter. One of them is Adem El Gabtini.

Where planes and trucks park

“I was glad, in this situation to be able to help,” he said. As El Gabtini enters the hall, where because of strict security regulations hardly anyone has access, is his first impression: “Gigantic!” On one side those aircraft were unloaded, on the others the trucks were docked. “Everywhere in the room there are packages. And the hall is really huge.” In the end, everything goes really fast. “On K2 a truck is coming in 15 minutes. Are you ready? ” El Gabtini loads trucks one after the other.  Medications have to stay in the refrigerator they arrived in. Saturday and Sunday most of it comes in. Then the trucks take care of it -traffic jams on the streets. The Luxair organizers are excited about how quickly WSA is ready, but above all, how professional the new colleagues work. “We’re a military warehouse,” Bodson said. “We have totally different safety regulations. Our people are well trained, have great equipment, work strictly according to regulation.” The warehouse finally empties

Common through the Crisis

On April 13, the Mission ended. “I’m glad we could help Luxembourg in this situation,” Bodson said. It’s not the only case in which the WSA in the Corona Crisis was on top of things and in which the US Air Force was on board. -Such as the American Air Force electricity generators and cooling units provided for the temporary hospitals, it was the WSA, who supplied the material to the ground and set it up. -Like when the NATO Support and Procurement Agency (NSPA) had a personnel shortage, the WSA sent security guards. “We are in a shared public health crisis, and everyone must pull together,” reaffirmed the U.S. Ambassador to Luxembourg, Randy Evans. 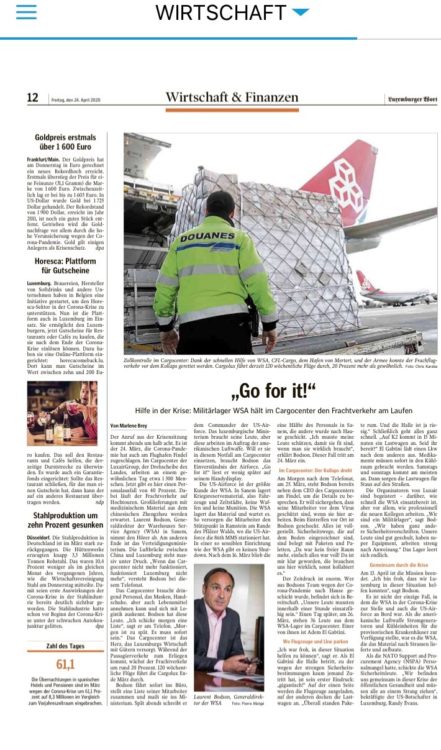 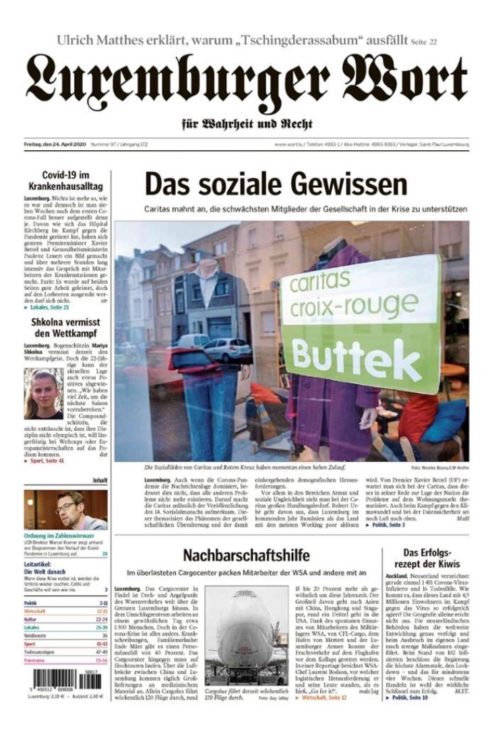