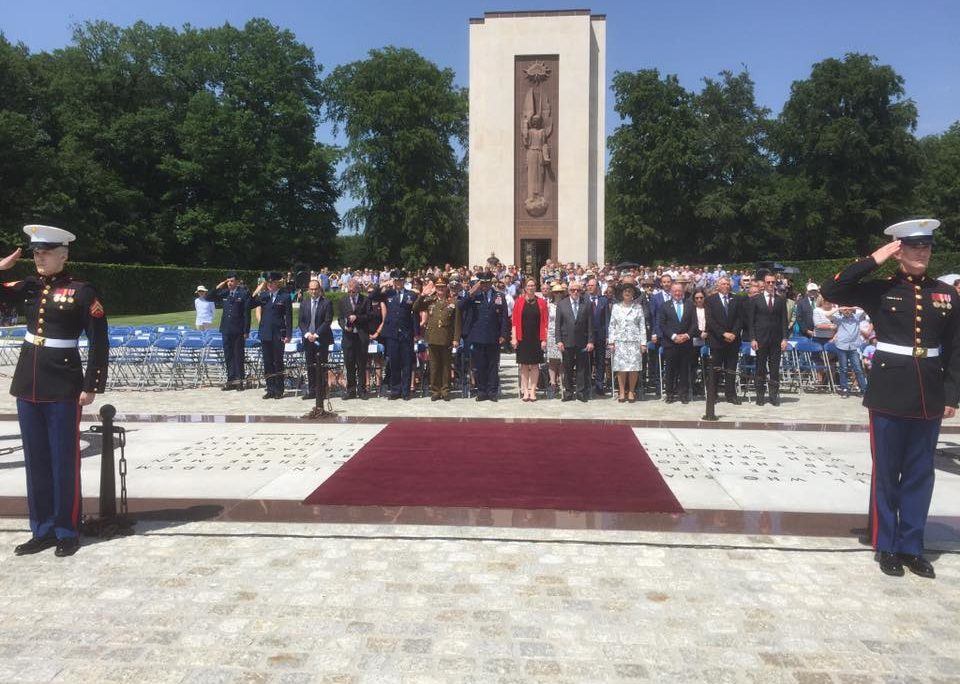 This year, the fly-over was performed by a U.S. AirForce C120-J SUPER HERCULES, assigned to the 37TH AIRLIFT SQUADRON of the 86TH AIRLIFT WING based at RAMSTEIN AIR FORCE BASE, GERMANY. The Flight Commander for this mission was CAPTAIN ZACK WILLIAMS and the Co-pilot, CAPTAIN JANE MARLOW.

In her remarks, Ms. Hannan thanked Luxembourgers for their relentless efforts in honoring and remembering the sacrifices of their liberators: “There are [more than] 110 memorials throughout the country, as well as museums and commemorative societies that honor key events from the war and the U.S. soldiers’ sacrifices. The U.S. Embassy and the cemetery partner with many of these organizations and museums [ … ] As a direct result of WWII, NATO and the precursor to the EU were created to help prevent another World War. Luxembourg, a founding member of both of these important institutions, knew too well the price of war. Today they remain steadfast in their commitment to these institutions, alongside the United States and their allies”.

Guest speaker this year was LTG. Richard M. Clark, Commander of the 3rd Air Force Ramstein Air Base Germany, representing the Armed Forces of the U.S. Remarks on behalf of the Government of Luxembourg were delivered by Mr. Fernand Etgen, Minister of Agriculture, Viticulture, Consumer Protection and Relations with the Parliament.

– His Excellency Mr. Lucien Weiler, Marshall of the Court

– Ms. Simone Beissel, Vice-President of the Chamber of Deputies Bureau

– Mr. Georges Wivenes, President of the Council of State

– General Alain Duschène, Chief of Staff of the Luxembourg Army

– Mr. Serge Wilmes, Deputy Mayor of the city of Luxembourg

About the ABMC:
Established by Congress in 1923, the American Battle Monuments Commission commemorates the service, achievements, and sacrifice of U.S. armed forces. ABMC administers 26 overseas military cemeteries, and 29 memorials, monuments, and markers. https://abmc.gov/