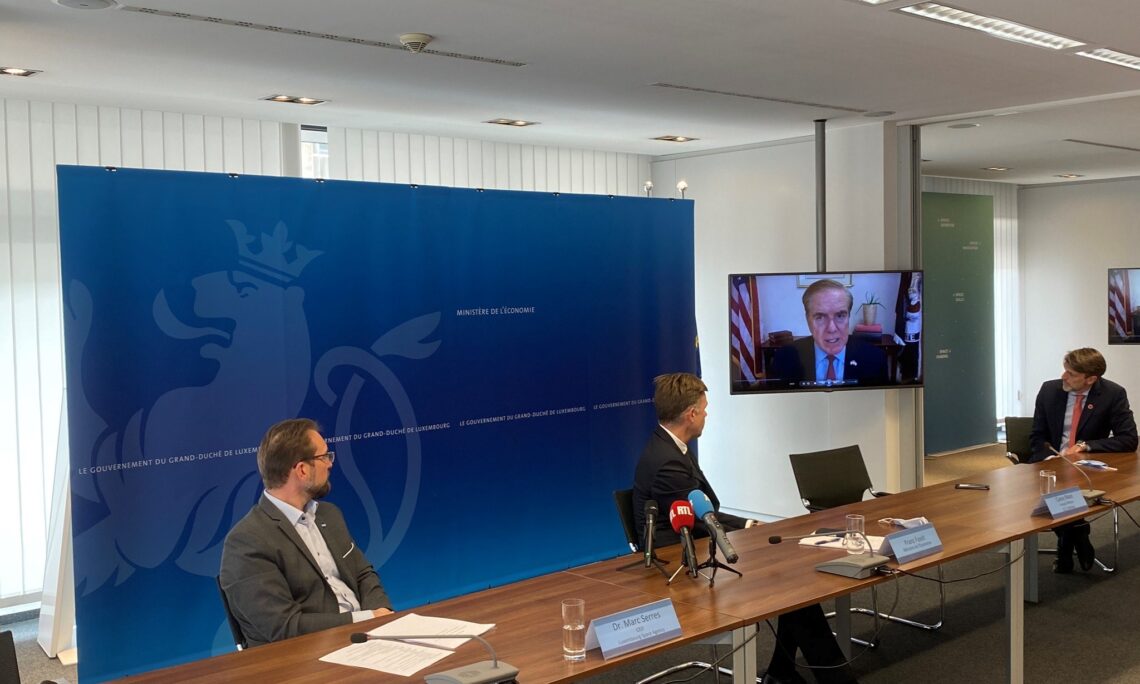 While NASA leads the Artemis program, which includes sending the first woman and next man to the surface of the Moon in 2024, international partnerships with the Luxembourg Space Agency and others will play a key role in achieving a sustainable and robust presence on the Moon later this decade while preparing to conduct a historic human mission to Mars.  Already, Luxembourg space companies are preparing to participate in missions to the Moon.

“Artemis will be the broadest and most diverse international human space exploration program in history, and the Artemis Accords are the vehicle that will establish this singular global coalition,” said NASA Administrator Jim Bridenstine. “With today’s signing, we are uniting with our partners to explore the Moon and are establishing vital principles that will create a safe, peaceful, and prosperous future in space for all of humanity to enjoy.”

“Today, we strengthen the U.S. and Luxembourg collaboration in space and when we watch in a few years when the next astronaut sets her foot down on the moon, we can all collectively look back and say we did our part to help her and many more like her get there.  That is the magnitude of what Minister Fayot and NASA Administrator Jim Bridenstine have done this week.

The goal is to not just return to the Moon, but to maintain a sustainable presence there.  This will be a colossal effort, requiring the cooperation of many countries and the European Space Agency alongside NASA.  The Artemis Program will be the greatest example of international partnership and collaboration in the exploration and development of space in history.

It will inspire another generation of girls and boys to dream and experience the possibilities of space exploration with a whole new generation of heroes, both women and men, as we as mankind move onto the moon and then beyond.”

At an event hosted by the Government of Luxembourg, Minister Fayot announced, “The Artemis Accords integrate very well with the efforts Luxembourg has been making both nationally and internationally to support the peaceful exploration and sustainable utilisation of space, and more specifically, space resources for the benefit of all humankind.”

Minister Fayot concluded “In the next months, the Luxembourg Space Agency and NASA will further explore concrete opportunities for cooperation within the Artemis program, defining and re-defining Luxembourg’s contribution to the program based on our existing and future capacities. This in areas such as prospecting of resources, surface mobility and operations, and energy.”

Luxembourg Space Agency CEO Marc Serres added, “The Artemis Accords endorse the approach taken since 2016 by the Luxembourg Space Agency with its SpaceResources.lu initiative aimed at the peaceful exploration and sustainable utilization of space resources. We look forward to the ongoing exchange of information and expertise with the 8 founding partners.”

In addition to Luxembourg and the United States, the elite group of other founding member nations that have signed the Artemis Accords, in alphabetical order, are as follows:

NASA announced it was establishing the Artemis Accords earlier this year to guide future cooperative activities, to be implemented through bilateral agreements that will describe responsibilities and other legal provisions.  Luxembourg was one of the first countries that NASA invited to join.  Luxembourg and the other partners will ensure their activities comply with the Accords in carrying out future cooperation. International cooperation on Artemis is intended not only to bolster space exploration but to enhance peaceful relationships among nations.

“Fundamentally, the Accords will help to avoid conflict.  Transparency, public registration, deconflicting operations – these are the principles that will preserve peace.  So many conflicts have been caused by misperception and confusion.  The Artemis Accords are crafted to prevent conflict before it happens,” said Mike Gold, NASA acting associate administrator for international and interagency relations. “The Artemis journey is to the Moon and Mars, but the destination of the Accords is a peaceful and prosperous future.”

The Artemis Accords reinforce and implement the 1967 Treaty on Principles Governing the Activities of States in the Exploration and Use of Outer Space, Including the Moon and Other Celestial Bodies, otherwise known as the Outer Space Treaty.  The Artemis Accords also reinforce the U.S. and partner nations’ commitment to the Registration Convention, the Agreement on the Rescue of Astronauts, and other norms of behavior that NASA and its partners have supported such as the full and public release of scientific data.  Specifically, the Principles of the Artemis Accords are:

Peaceful Exploration:  All activities conducted under the Artemis Program must be for peaceful purposes;

Transparency:  Artemis Accords signatories will conduct their activities in a transparent fashion to avoid confusion and conflicts;

Interoperability:  Nations participating in the Artemis program will strive to support interoperable systems to enhance safety and sustainability;

Release of Scientific Data:  Artemis Accords signatories commit to the full and public release of scientific information, allowing the whole world to join us on the Artemis journey;

Protecting Heritage:  Just like we do on Earth, Artemis Accords signatories commit to respecting historical sites and artifacts in space;

Space Resources:  Extracting and utilizing space resources is key to safe and sustainable exploration and the Artemis Accords signatories agree that such activities can and will be conducted in compliance with the Outer Space Treaty;

Deconfliction of Activities:  The Artemis Accords nations commit to preventing harmful interference and supporting the principle of due regard, as required by the Outer Space Treaty; and Orbital Debris:  Artemis Accords countries commit to planning for the safe disposal of debris.

Artemis will be the broadest and most diverse international human space exploration program in world history.  The Artemis Accords are the vehicle to achieve this unprecedented global cooperation.  More countries will join the Artemis Accords in the months and years ahead, following Luxembourg’s leadership to establish a safe, peaceful, and prosperous future in space for all of humanity to enjoy.  But, as Ambassador Evans put it, “make no mistake, the Grand Duchy of Luxembourg was, along with the United States of America, among the very first to join in this collective step toward a better, safer, and peaceful future for all of humankind.”