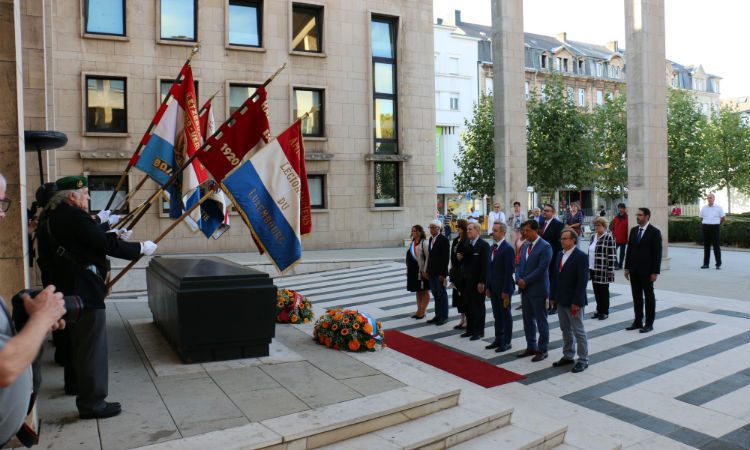 September 10th, 1944 marks a special day in the Luxembourgish commemoration calendar. On this very day, U.S. troops liberated Luxembourg City. But the capital wasn’t the only city to be delivered on that day. Esch-Alzette and many other towns were liberated too. Units of the 5th U.S. armored division, commanded by General Lunsford E. Oliver, entered Luxembourg City by mid-morning. The day before, they had engaged in some minor firefights with retreating armored German units encountered on the outskirts of Luxembourg City. Amongst the U.S. troops, dressed in the uniform of a British General, was the husband of Grand Duchess Charlotte (still in exile), Prince Felix. A few hours later, he was joined by his son, the Crown Prince Jean, who was serving as a 1st Lieutenant with the Irish Guards. Although the war wasn’t over yet and Northern Luxembourg was still occupied by Nazi Germany, large parts of the country of Luxembourg, including the city of Esch, had been finally liberated by the Nazi tyranny.

To start the commemoration, Ambassador Evans and his wife Linda, together with Esch-Alzette City Mayor Georges Mischo and the Council of Aldermen laid a wreath at the Monument aux Morts, Place de la Resistance. The second part of the ceremony took place at the U.S. Memorial, after a walk in a procession through the city center of Esch, lead by the municipal harmony and the flag-bearers. After paying officials paid their respects, taps and the national anthems of the U.S. and Luxembourg were played. The commemoration ended with a reception at the town hall of Esch where Mayor Mischo gave brief remarks and Ambassador Evans and Mrs. Evans signed the city’s golden guest book.