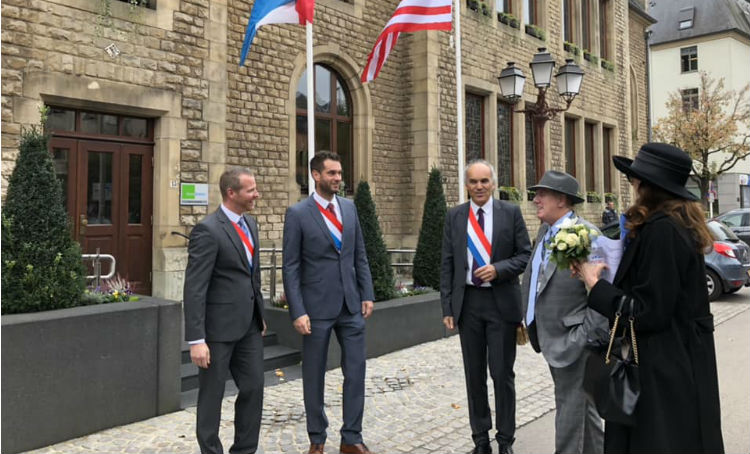 On Friday, 26 October 2018, Ambassador Evans and Mrs. Evans made an official visit to the city of Ettelbruck, also famously known as Patton Town. The visit started by a welcome by city Mayor Mr. Jean-Paul Schaaf, Bob STEICHEN and Christian STEFFEN, College of Aldermen and a presentation of the city’s history. The visit went on to the Patton square where a wreath was laid by the Ambassador and Mayor Schaaf. To finish the day, Ambassador and Mrs. Evans were welcomed by The Patton Memorial Museum President, Jos Tholl, and several of the museum board members.

Just as Bastogne is known as “Nuts” town, the city of Ettelbruck in the Grand-Duchy of Luxembourg has as a nickname: “Patton town”. Since the early 50’s, the city of Ettelbruck had been hosting every year in July elaborate commemorations (known as Remembrance Day and/or Patton Days) built around the person of General George S. Patton, Jr., whose 80th Infantry Division liberated the town and surrounding areas on December 24-25, 1944, as well as honoring the US, British, French, Belgian and Luxembourgish troops who fought with him there. After the 60th anniversary in 2004, the city decided to only host the celebrations every five years. They are thus planning another Remembrance Day for next year’s 75th anniversary and will be part of the Embassy co-sponsored event “Keystone in the Way.

Tucked away in a side street in Ettelbruck, the General Patton Memorial Museum was inaugurated in 1995. It recently enlarged its exhibits and is now open DAILY (except Mondays) from 10 to 18 hrs. It has a number of personal items of General Patton, donated by the Patton family, as well as a wide selection of memorabilia pertaining to the “Patton Days” of the past that always used to attract thousands of visitors. Above all, the museum also portrays the WWII experience of Luxembourg (1940-1945) in a detailed way thru a series of striking dioramas, theme exhibits (forced conscription during the occupation, Luxembourg resistance groups … etc), documents, hundreds of photographs, – the air war over Luxembourg –, the “September 1944 liberation and the Bulge”, as well as a special section on military archeology (striking artifacts that had been excavated in the 60’s and 70’s).

The museum also owns an oversized bronze statue of General Patton which is a copy of an original statue of General Patton (3 meters high), created by American sculptor James Earl Fraser. The first statue was erected in 1950 on the compound of West Point Military Academy. The replication was dedicated on the Patton Square in 1970 on the occasion of the city’s Remembrance Day celebrations.
The museum is owned by GREG “Groupe de Recherches et d’Etudes sur la Guerre” or “WWII research and study group” and is run by volunteers. Most of its treasures and collections are privately owned. It is a partner museum of the nearby Diekirch National Museum of Military History.

The square is located at the entrance of Ettelbruck (coming from Diekirch), symbolically guarding the Luxembourg Ardennes, also where the German offensive into Luxembourg’s Alzette river Valley was stopped.

The Ettelbruck Sherman Tank has been for over 40 years a well-known sight at the entrance of town next to the General Patton statue. It is an M4A1 VVSS 75 mm tank that had once been provided by the US forces to the French “2e division blindée” (Gen. Leclerc) and took part in the liberation of Paris in late August 1944. It was donated to the city of Ettelbruck in the late 60´s to become a permanent reminder of the liberation of Luxembourg. It had initially been stenciled as a vehicle of the 10th Tank battalion, 5th Armored Division that liberated Luxembourg in September 1944. In preparation of next year’s 75th anniversary of the “Bulge”, the General Patton Memorial Museum had it “renewed” and re-stenciled as a “Sherman” of the 34th Tank Bn/5th Armored Division. It was re-inaugurated on 5 October, 2018 along with 4 descriptive panels on its participation in the “Bulge” around Ettelbruck.