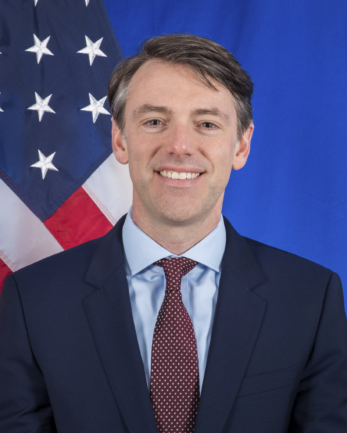 Casey Mace began his assignment as the Deputy Chief of Mission (DCM) at the Embassy of the United States to the Grand Duchy of Luxembourg in January 2019. Mr. Mace arrived in Luxembourg with 17 years of experience as a career member of the Foreign Service.

Prior to assuming his duties as DCM, Mr. Mace served as the Deputy Director in the Office of Western European Affairs at the U.S. State Department, where he led the teams responsible for U.S. relations with the United Kingdom, Germany, Ireland, the Netherlands, Belgium, and Luxembourg.

Earlier in his career, Mr. Mace served a number of assignments focused on Asia, culminating in a two-year posting to the White House, where he served President Trump and President Obama as their advisor on Southeast Asia. In that role, he prepared and accompanied the President for his participation in five multilateral summits, six bilateral meetings, and one State visit.

Before joining the State Department, Mr. Mace worked for a consultancy in the Space and Telecom industries. Mr. Mace earned a bachelor’s degree from Georgetown University. He and his wife, Anne, have four young children.