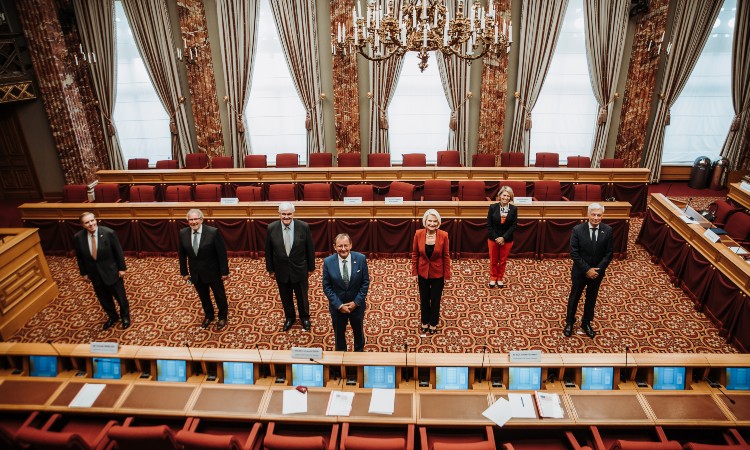 WASHINGTON – Export-Import Bank of the United States (EXIM) President and Chairman of the Board of Directors Kimberly A. Reed, at the invitation of U.S. Ambassador to Luxembourg J. Randolph Evans, participated in the American Chiefs of Mission September Summit 2020 (September Summit) and various side meetings.

While in Luxembourg, Chairman Reed engaged in strategic discussions with U.S. Ambassadors to 16 European nations, interagency colleagues from the U.S. Departments of State and Commerce and the National Aeronautics and Space Administration, and leaders from the Luxembourg Government and European Union institutions.

“It was an immense honor to join such a distinguished group of U.S. Ambassadors to Europe for discussions on topics important to the United States, Europe, and the world – ranging from U.S.-European relations to COVID-19 economic recovery to space cooperation to EXIM,” said EXIM Chairman Kimberly Reed. “The United States and Luxembourg are two nations committed to advancing liberty and prosperity. EXIM is a tool in our nation’s toolbox, and we together will do our utmost to strengthen the United States competitiveness around the world, support jobs for our nation’s workers, and keep America strong. I want to thank President Trump for his leadership, guidance, and focus in the most challenging of times, and for wisely taking a whole-of-government approach, which prominently includes EXIM.”

The following U.S. Ambassadors and officials participated in the September Summit:

On Wednesday, September 23, Chairman Reed joined the 16 U.S. Ambassadors to pay their respects to the 5,070 service members, including General George S. Patton Jr., buried at the Luxembourg American Cemeter.  The group then convened at the Court of Justice of the European Union to meet with President Koen Lenaerts.

While at the Court of Justice, Chairman Reed presented her September Summit remarks to the U.S. Ambassadors.  She outlined President Trump’s leadership on EXIM that led to the agency’s full reopening in May 2019 following nearly four years of dormancy and the agency’s historic seven-year bipartisan Congressional reauthorization—the longest in the agency’s 86-year history—which was signed into law by the President on December 20, 2019.

“EXIM seeks to reserve at least 20% of our financing authority, or at least $27 billion of our $135 billion in financing, to ‘neutralize’ Beijing’s export subsidies, advance the comparative leadership of the United States with respect to the PRC, and support U.S. innovation, employment, and technological standards through direct exports in 10 industries key to America’s prosperity and security.  These include 5G, artificial intelligence, biomedical sciences, biotechnology, and financial technology,” said Chairman Reed.  “As Speaker Gingrich wrote last month in The Hill, EXIM’s new China Program will ‘better position the U.S. to push back on China’s global industrial policies and geopolitical ambitions.’  And, when it comes to detractors, the Speaker—who, like me, believes in free markets and that economic security is national security—put it in crisper, simpler terms to me last night: ‘You must ask them: Are you with us or are you with China?’”

During her remarks, Chairman Reed recognized U.S. Ambassador to Luxembourg J. Randolph Evans and highlighted EXIM’s focus on emerging technologies and the space industry.  EXIM recently engaged with 180 space technology leaders and stakeholders as part its “Strengthening American Competitiveness” initiative to help set the foundation for EXIM’s Program on China and Transformational Exports.

“Mr. Ambassador, you are an accomplished leader, as evidenced by your arranging this unprecedented summit to discuss with candor the challenges and opportunities that lie ahead for the United States, Luxembourg, Europe, and the world,” said Chairman Reed.  “Ambassador Evans, you also have a vision that extends literally to the stars.  Our gathering coincides with the visit to Luxembourg of a United States Space Delegation led by former House Speaker Newt Gingrich.”

EXIM is an independent federal agency that promotes and supports American jobs by providing competitive and necessary export credit to support sales of U.S. goods and services to international buyers. A robust EXIM can level the global playing field for U.S. exporters when they compete against foreign companies that receive support from their governments. EXIM also contributes to U.S. economic growth by helping to create and sustain hundreds of thousands of jobs in exporting businesses and their supply chains across the United States. In recent years, approximately 90 percent of the total number of the agency’s authorizations has directly supported small businesses. Since 1992, EXIM has generated more than $9 billion for the U.S. Treasury for repayment of U.S. debt.