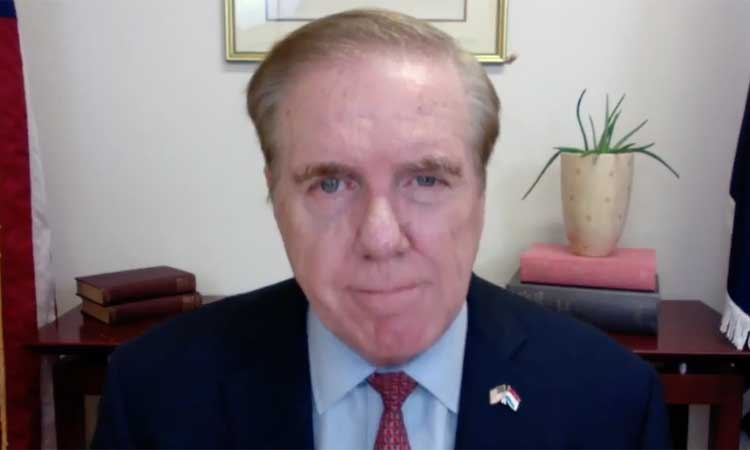 And Moien from Washington D.C., where I have come to continue to participate in the conversations leading to the Grand Duchy of Luxembourg’s role and as one of the first signatories joining the efforts to land the first woman and the next man on the Moon.

It is somehow fitting that I would stand in the very same spot I did over two years ago when I started my tenure as the 23rd Ambassador to the Grand Duchy of Luxembourg and I said this:

“While never forgetting the important lessons of the past, Luxembourg looks toward the future, the stars.  Luxembourg has emerged as a leader in the space sector, and I look forward to strengthening U.S. and Luxembourg collaboration to develop the technologies of the future together.”

Today, we strengthen the U.S. and Luxembourg collaboration in space and when we watch in a few years when the next astronaut sets her foot down on the moon, we can all collectively say we did our part to help her get there.  That is the magnitude of what Minister Fayot and NASA Administrator Jim Bridenstine have done this week.

As many know, the United States is preparing to send the first woman and next man to the Moon by 2024 under a program called Artemis.  The goal is to not just return to the Moon, but to maintain a sustainable presence there.  This will be a colossal effort requiring the cooperation of many countries along with the NASA, the European Space Agency and the United States.  The Artemis Program will be the greatest example of international partnership in space history.

Not surprisingly, the world wants to be part of such an enterprising effort with implications reaching the very survival of the people on this planet.  Yet, not everyone could be among the first to be part of such a bold undertaking. Luxembourg is not new to Space and certainly not new to bold steps and it is appropriate that it is among the first.

But, the US / Luxembourg collaboration is relatively new beginning just a couple years ago with the Space Memorandum of Understanding which United States Secretary of Commerce Wilbur Ross signed in Luxembourg with then Deputy Prime Minister Etienne Schneider.

Since then, we have continued our collaboration and work with a series of efforts culminating now with this historic achievement.  As the U.S. Ambassador to Luxembourg, I take personal pride that NASA and the U.S. Department of State selected Luxembourg as one of the first five countries in the world to help draft and shape the historic Artemis Accords, which represent the standard for international behavior on the Moon, Mars, and beyond.

When we again reach the Moon, we will bring with us our principles of responsible behavior. These principles, which are derived from the Outer Space Treaty of 1967, are laid down in the “Artemis Accords” which Luxembourg and a select few other countries have now signed.  Any country that wishes to participate in the return to the Moon with NASA must be party to the Artemis Accords, and Luxembourg is showing itself to be an important player in our efforts to return to the Moon.

This is an enormous achievement for our government, our Embassy, and for the people of Luxembourg.  I remember being inspired as a boy in Georgia, staying up late to watch the first moon landing in 1969. This experience led to fascination with and a desire to contribute to the exploration of space that has stayed with me all my life.

That enthusiasm carried with me to the U.S. Embassy in Luxembourg and I am proud to have overseen many milestones of space cooperation with the Government of Luxembourg.  Our 2019 American Independence Day commemorated the 50th anniversary of the Apollo 11 landing, and on that occasion, astronaut Buzz Aldrin, a personal hero of mine and the second man to set foot on the Moon, came to Luxembourg to meet the Luxembourg Space Agency team and the Government Advisory Board on Space Resources.

Just last month, we hosted a Space Delegation led by former Speaker of the House Newt Gingrich, and with representatives from NASA, the Department of State and the Department of Commerce, to move forward with our collaboration in space commercialization.  The Space Delegation left Luxembourg impressed with the determination, dedication, and innovation being applied to develop Luxembourg’s space industry into a world-class enterprise. Yesterday’s signing by Luxembourg of the Artemis Accords confirms Luxembourg’s place as major player in space and an integral part of this historic program.

Before that, Minister Fayot, along with other members of the government have explored more ways in which we could work together including the Artemis Accords as we look deep into the future for our countries.  He immediately grasped the significance of these efforts as did the Luxembourg Space Agency team and Deputy Prime Minister Francois Bausch.  So, it is with great pride and enthusiasm that I say these words:

Minister Fayot, allow me to express my appreciation to you, your staff and the Luxembourg Space Agency, including your colleagues Mario Grotz, Marc Serres, and Mathias Link, for the leadership you have shown to promote international cooperation in space.  Congratulations on being selected to the first group of five nations responsible for creating the Artemis Accords.  In just a few years, your country has demonstrated remarkable foresight and innovation by creating a space agency founded upon commercial opportunities in space that will benefit all mankind.  You have made Luxembourg an internationally recognized leader in space resources and space policy, and it’s been an honor to work with you on behalf of the American people to achieve our shared goals in space.  Thank you for joining with the United States to create the Artemis Accords and ensuring the responsible return of humankind to the Moon.

It will enable another generation of boys and girls to likewise be inspired to dream and see the possibilities of space exploration in seeing a new generation of heroes, both men and women, step foot on the moon. From this day forward, we can collectively say we helped make that happen.”