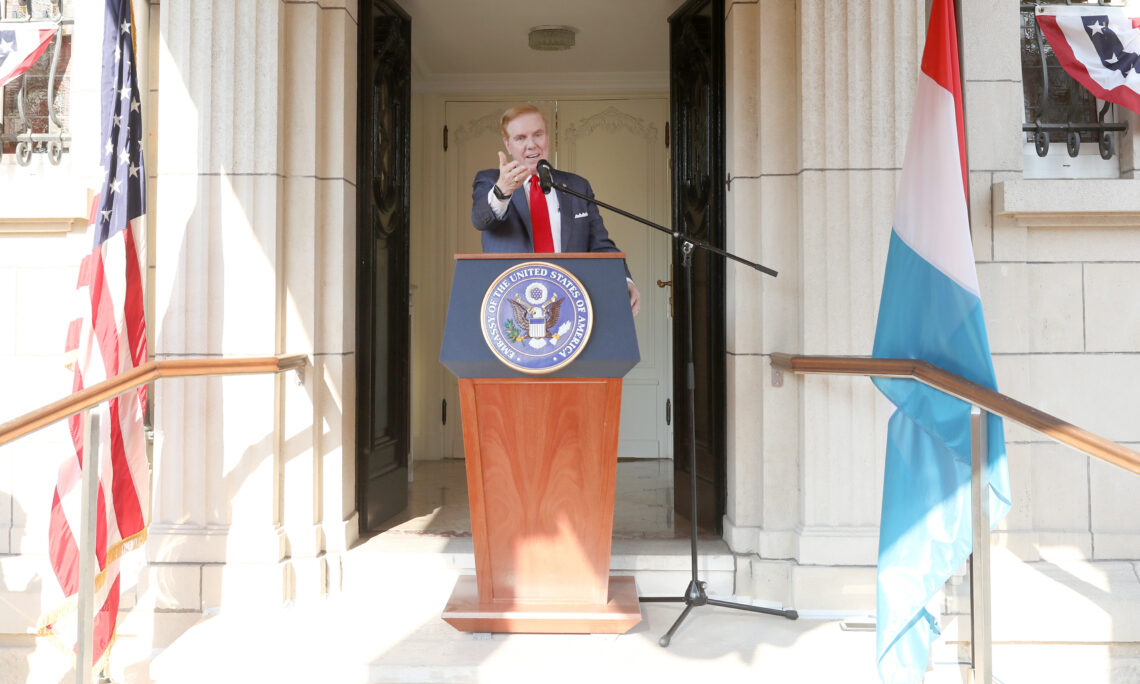 Hello, or Moien, as we say here in Grand Duchy of Luxembourg. I am Randy Evans, the 23rd United States Ambassador to this beautiful and influential European country.

Today, some 244 years later, we celebrate our decision, proudly made on July 2nd, 1776 and documented in writing on July 4, 1776, making life, liberty, and the pursuit of happiness paramount. This document confirming our decision sounded that loud and clear. Not surprisingly, few at the time thought we Americans would actually make it through the many trials and tribulations that lie ahead as this new kid on the block made its way through times of trouble and uncertainty.

Some say we have the most polarizing leaders we have ever had. Yet one of my heroes, Abraham Lincoln, was so polarizing that after his election, the Civil War started before he could even take office, with many states defiantly refusing to ever let him be their president.

This idea that we have never had so many bad things going on at once forgets July 4th, 1918. The Spanish flu pandemic of 1918, the deadliest in history, infected approximately one third of the world’s population, killing an estimated 20 million to 50 million victims of which, 675,000 were Americans. Meanwhile, there was uncertainty in the world, Russia, another world power was in the middle of its own civil war with the assassination of its Czar and his family less than two weeks after Americans celebrated their independence on July 4, 1918.

Yes, these are tough times for the world, our country, and we Americans. Personally, I have been away from my wife Linda for 83 days, the longest since we’ve been married, serving at my post while the COVID-19 pandemic raged all around and as my homeland struggled to heal from hurt inflicted centuries ago. But when I stand amidst the over 5000 at the Luxembourg American Cemetery, who died so that I might be free, I quickly realized that I have no real standing to complain. We Americans always rise up. It is no individual person, place, or thing that makes us who we are. We are the embodiment of our purpose. It is why our Constitution begins with “We the people in order to form a more perfect union.”

We are not perfect, and we will never be. But we can be great. And we must strive to continue for perfection because it is who we are. Some of these burdens are ones that we impose on ourselves. Others have been thrust upon us, but as we who have steadily overcome all that is before us in our quest to form a more perfect union, which guarantees to every America fully, completely, and equally the right to life, liberty, and the pursuit of happiness. That’s who we are. And that is what this document stands for. And that is what I stand for from here, in the ceremonial offices of the Chief of Mission Residence of the United States Embassy to the Grand Duchy of Luxembourg.