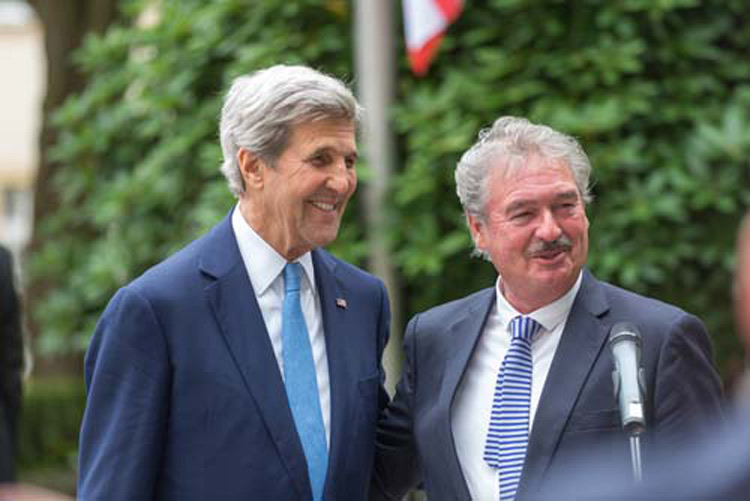 On July 16th 2016, Secretary of State John Kerry arrived on an official two-day visit to Luxembourg to meet with members of the Luxembourgish government and to strengthen ties with this important ally of the United States of America and fellow NATO member. After arriving from a visit in Moscow early on the 16th, Secretary Kerry met with His Royal Highness Prince Guillaume, Hereditary Grand Duke of Luxembourg at the Grand Ducal Palace. Secretary Kerry then walked through the streets of Luxembourg City enroute to the Ministry of Foreign Affairs, greeting tourists and residents along the way. At the MFA, Foreign Minister Jean Asselborn and Secretary Kerry made brief remarks in front of the Ministry of Foreign Affairs before sitting down to a working meeting. At the close of the meeting, Minister Asselborn joined Secretary Kerry at a vigil honoring the victims of the Bastille Day Attack in Nice, France, laying flowers at The Monument of Remembrance, also called the Gëlle Fra, in the presence of the French Ambassador Guy Yelda. Later on the 16th, Secretary Kerry, an avid cycler, was driven to Steinforte where he met Minister Asselborn and Luxembourg’s Tour de France Champion, Andy Schleck, for a 40km bike ride through the picturesque Luxembourgish countryside. The three stopped for a brief refreshment at local Restaurant, Relais Bausch, in Brouch before finishing their trek.

On the 17th, Secretary Kerry began his day with a working lunch at the Grand Ducal Golf Club where he met with Prime Minister Xavier Bettel and his cabinet members. Secretary Kerry then paid his respects at the Luxembourg American Cemetery and Memorial where Scott Desjardins, Superintendent of the Luxembourg American Cemetery and Memorial in Hamm, gave a guided tour. Kerry and Prime Minister Bettel laid roses and visited the grave of an unknown soldier and that of General George S. Patton. Kerry then laid a white rose at the graves of two brothers from Massachusetts who are buried side by side. The Secretary then continued on to Brussels where he will complete a visit before heading to London.

Ambassador McKean and the entire embassy staff were pleased to welcome Secretary Kerry to Luxembourg and are confident that the visit further strengthens the strong ties between the United States of America and Luxembourg.

More photos of the visit can be viewed on our official Flickr page: https://www.flickr.com/photos/usembassyluxembourg/.