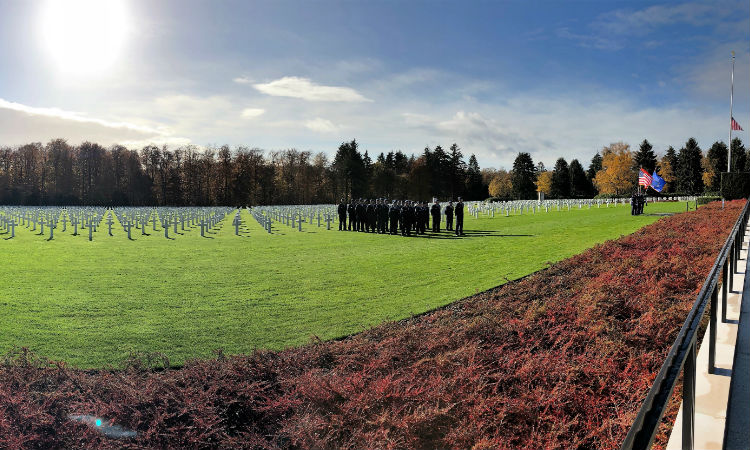 Good morning and welcome – thank you all for coming to:

Members of the Diplomatic Corps;
Government of Luxembourg;
Veterans;
All the members of the 52nd Fighter Wing’
Everyone from the Spangdahlem Air Base community;
Scouting Groups;
Cemetery and Embassy Staff; and,
most importantly for me, my dearest Linda.

Today is an important day. 100 years ago, the United States of America, France, Great Britain and Germany signed the Armistice for the cessation of hostilities on the Western Front of World War I effective at 11 a.m. on the 11th day of the 11th month.  Almost 10 million soldiers died at the hands of some of the most horrific weapons imaginable.  Cities, homes, buildings, and lives were destroyed.  The amount of human toil and suffering can never be quantified and emotional costs and spiritual deprivation defy even description.

The formal ending of the war through the Treaty of Versailles would not come until the following year.  Unfortunately, it would not be the war to end all wars as historians had hoped.  Instead, the world would call on our soldiers again and again over the century with another world war less than 3 decades away.

Each time, our soldiers and their families would answer the call to duty, giving their all and often their lives.

And so, we gather today to not just commemorate the end of the tragic first world war, but also we gather to take a moment to honor and thank all of our veterans for their service to our country and the world.  But it does not end there.

Despite coming from so many backgrounds we gather here today as a united community with a common purpose – to remember the past in order to commit ourselves to a peaceful future.

Seeing these markers and hearing and reading the stories behind that each represents is an important reminder that our freedom is never free, nor has it been.  Part of the enormous cost of freedom is squarely before us with real names and real dates of death alongside the name of the homes left behind.  While we get to enjoy our freedom today, these are the soldiers that stepped forward to pay the price for us, with their lives.

It is important that we never allow their service to be overlooked or forgotten.  It is why the United States of America dedicates this day – Veterans Day – to honor American veterans, both living and dead on this day.

How do we do that – well, one way is to fully invest ourselves in keeping their stories and their sacrifices real for the next generations doing something – like we are all doing today.

No book or movie can substitute what we each should see, hear, and feel for ourselves, in fact validate for future’s sake that these soldiers suffered and died so that we could be free. Connecting with our past by walking the footsteps, finding the places, and repeating the stories of veterans who have sacrificed so much so that the rest of us might be free is but a pittance of what we owe those who served so bravely, against worst of evils willing to use the most violent weapons of war against them.  Right here in Luxembourg, in Europe, we can:

But there is more.  For the veterans who are with us, and those with whom we can still talk, we have within our abilities to make a difference even now.  It can be something as simple as telling them “thank you.”  Thank you for your service.  Thank you for your willingness to serve.  Thank you for being the best our country has to offer the world.  You make us so proud.

Nothing can ever fully compensate our veterans for the risks they have taken, the time they have devoted, the toll they have paid.  Yet, it is important that we try.

It is important because it is but a small down payment on the debt, we owe them.  But its importance goes well beyond that.

Our future will be best secured by those of us who not only remember the past but connect to the past.  It is the connection that creates the best opportunity for lasting peace.

When I first arrived, I was struck by how often I was thanked by Luxembourgers for the sacrifice made by American veterans for things they did 100 years or 75 years ago.  The expressions of gratitude are heartfelt and real.  They are also humbling.

On behalf of the President of the United States and all of the American people, let me make clear how grateful we are that our country’s sacrifice, now generations later is still remembered in Luxembourg openly, graciously, and genuinely by:

The stories of Luxembourgers, passed down from one generation to the next, are full of context and meaning for understanding and appreciating what happened here and throughout Europe all those years ago.  The details make the stories come to life so that the sacrifices can be fully appreciated as things that happened in the real world in which real men and women suffer but persevere; lived on in our hearts and memories after death; and, define what life well lived is all about.

A few weeks ago, Linda and I had the opportunity to retrace the steps of her great uncle who died in World War I just less than a month’s before it ended.  I can tell you from my own personal experience that connecting with Corporal Leslie Adams enriched us far more than we could have ever imagined.  He died serving his country, but through that connection, built on old maps and military records, and the extraordinary skills of a historian, he was suddenly back with us as he lived on in our hearts and our memories – and so we honor him today, along with every other veteran who has served and who is serving.  But no soldier is an isolated statistic recorded for historical accuracy.  No, Corporal Adams, like all those who served with him, was a beloved son and brother, eventually returned home to be buried with his mother.  He served in Company G, 2nd Battalion, 355th Infantry Regiment, 178th Infantry Brigade, 89th Infantry Division with the division nicknames “Rolling W” and “Midwest” division.

Corporal Adams’ 2nd Battalion entered combat on October 20 near the village of Bantheville and was leading the brigade attack on October 21 on the eastern edge of the Bois de Bantheville under heavy artillery and machine gun fire when he was killed by shrapnel from the artillery.  He was less than 4 weeks from his 24th birthday.

We honor him today, along with every other veteran who has served or who is currently serving.  His “dying wish” in his lost letter home was a watch for Christmas.  But time stopped for him before he could get his watch.  Yet, because of his sacrifice, and the sacrifices of so many others like him, time went on for others in his unit and for the causes of liberty and freedom for all of us.

Linda’s Uncle Richard LaFrance was a First Lieutenant during the Second World War and served in this area.  In fact, two of his 714th tank battalion mates are buried side by side in this cemetery.  He returned from the war a blind man.  But he did not come home seeking pity or handouts.  Instead, he continued to step forward as one of the greatest generations.  Although he wanted to be an American football coach, he adapted to his new life circumstances without sight and became a personal trainer at Cornell University in upstate New York.  He was so good that he helped some true American professional athletic stars including Frank Gifford and Y. A. Tittle.  He persevered, working until retirement at Cornell and living in Ithaca, New York – the proud father of 2 sons and 2 daughters.

So, let me say this as directly as I can.  Take advantage of where we are and who we are with.  Cherish the memories, the stories, the service, and the sacrifice of our veterans because it is a gift worth cherishing.  We can never take such things for granted or fail to take the opportunity to remember and appreciate them.

Prime Minister Xavier Bettel put it this way in his remarks on National Day: “In a time when extremism in the world has not disappeared yet, but in different countries, is growing stronger, we the voice of those who can look further back than us.  My generation has never experienced war in our regions, we have never become victims of exclusion and oppression.  We also never had to worry that our freedom is in danger, and that everything that is important to us can be lost.  We are missing therefore the part of consciousness for what can happen when one let’s unchecked those forces that can push a wedge between people. We should listen more and take time for our parents and grandparents; we must take time to learn, take something with us of this knowledge, that we cannot come by on our own.”

The rich history of Luxembourg and experience (and lifespan) of Luxembourgers makes that an especially important point now – at this moment in time.  Indeed, as the United States’ Ambassador to the Grand Duchy of Luxembourg, I have been struck by the number of people willing to share their own stories regarding both World  War I and World War II; the places around the Grand Duchy that were central to so many historical moments; and the grace and dignity of those who share why these things matter so much.

That’s why we are here, and I am so honored to be here with you today.

I am honored to stand here to thank our Veterans and those who are serving today.

I am honored to stand here and remember all those who fought and died in the First World War.

I am honored to once again pay tribute to America’s fallen heroes who gave their lives never able to see the fruits of freedom and prosperity that their sacrifices secured.

And finally, I am honored and truly blessed to have the chance to reflect on our sacred past with the profound belief that, in doing so, together we are building a brighter future.

General John J. Pershing, the Commander in Chief of the American Expeditionary Forces, Proclaimed from the General Headquarters on November 18, 1918 as followed:  After four years of territorial violation, the Grand Duchy of Luxembourg has now been finally freed.  Less than three decades later, General George S. Patton would again liberate Luxembourg.  Because of their actions, Luxembourg remains free today.

May God bless the United States of America and the Grand Duchy of Luxembourg. Amen and amen.