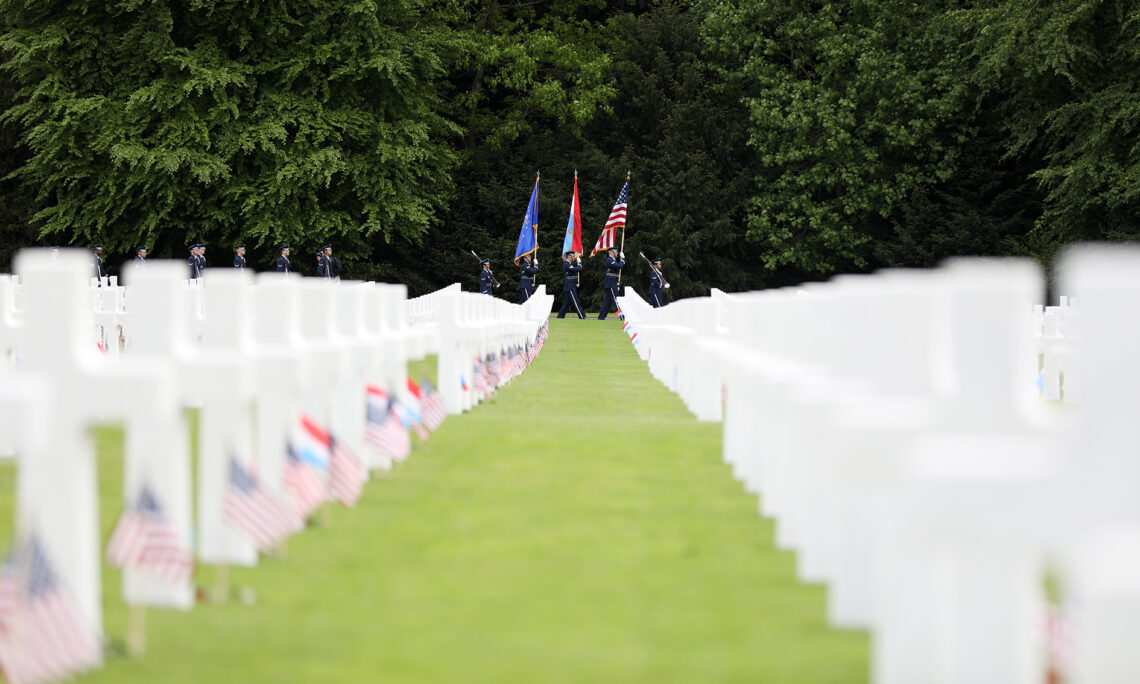 It was a truly beautiful ceremony honoring all those that served and paid the ultimate sacrifice.

“I am proud to serve as the U.S. Ambassador to Luxembourg every day, but particularly on days like today, that mark such important events to honor our military and commemorate those who gave their lives to secure the freedom of the United States, Luxembourg, and the world.

Most of these graves behind me belong to young people, service members who had their whole lives ahead of them. Today we pause not just to honor all of them here, as well as all those resting in peace all over the world.”

A special tribute was made this year to the one woman (a nurse) buried at the Luxembourg-American Cemetery – Lieutenant Nancy Leo – by Cecille Jimenez, the medical provider charged with the health and safety of the Embassy of the United States in Luxembourg and Brussels.

In her speech, Ms. Jimenez said:

“Nurses and doctors have always played an important role in the world and this includes the world at war, against known enemies and invisible viruses. It is notable that prior to World War II conflict more combatants died from illness and disease than wounds sustained in battle.

Medical professionals give themselves and sacrifice so much to do their jobs, risking their own health to help those in need. Whether we enlist and serve in our Armed Forces during war and at peace, or work tirelessly today and self-isolate from our families each day after work to keep them safe, we do these jobs because we are passionate about the work and we care deeply about our patients. Above all, we want to help others and keep the world safe.”

We thank you all for joining us virtually!

A complete video of the event will be available here after the ceremony.

The United States Ambassador to the Grand Duchy of Luxembourg, J. Randolph Evans, announced today the Embassy’s plans for commemorating Memorial Day 2020 on May 23rd.

“For the fallen, our duty is to remember the sacrifice they have made so that we could live free to fight in another time and another enemy. General George S. Patton put it this way: ‘It’s better to fight for something in life than to die for nothing.’ So, as we face the challenges of our generation, we will nonetheless honour President Harry S. Truman’s pledge and our own obligation that ‘America will never forget their sacrifices.’”

Memorial Day is a U.S. Federal Holiday commemorating the men and women who died while in the military service of their country, particularly those who died in combat and on battlefields during armed conflicts around the world.

In that spirit, the Embassy of the United States in Luxembourg invites you to take a moment and join us through a streaming video to honor the 5,075 brave men and one woman at our Luxembourg-American Cemetery, and all others around the world who made the ultimate sacrifice in the name of freedom – securing the lives of all Americans, Luxembourgers and free peoples throughout the world.

Please note that in respect of the current COVID-19 social distancing restrictions for public gatherings, no visitors will be allowed to attend this year’s commemoration.

We invite you to join us live at 3pm on Saturday, May 23 via our Facebook page. Simply go to the Embassy Facebook page and reply “Going” to the Memorial Day event.

The entire video from the event will be made available here on our website after the event.