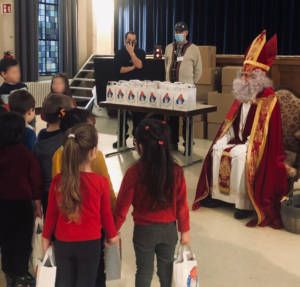 The Commune of Wiltz and Ouevre St. Nicholas Wiltz, with the assistance of U.S. Embassy Luxembourg, carried on the long tradition of the American St. Nick’s Day by visiting schools to bring joy to local children.

The history of the tradition dates back to WWII when, following the liberation of Wiltz in 1944, Corporal Harry Stutz of the U.S. Army’s 28th Infantry Division stationed there, dressed one of their own- Corporal Richard W. Brookins, in a Saint Nicholas outfit and distributed their own rations and candy to local children to revive a tradition that had been lost for five years due to the war.

Ever since, the people of Wiltz have continued to mark the day with a St. Nick’s Day parade in Wiltz.  This year, due to the COVID pandemic, the day was marked on a smaller scale, with St. Nick visiting the children in schools.

Mayor Fränk Arndt said: “We are very proud that the tradition of the American St. Nick is being maintained by both the local and the American community. Wiltz will not forget Dick and Harry, who personified the generosity of the American soldiers, and the events of September 1944 will forever remain a part of our city’s history.”

“American St. Nick’s Day in Wiltz, although primarily a day to bring joy to the children, is also a day of remembrance of the individual acts of kindness during the liberation of Luxembourg in WWII.  I am grateful to the commune of Wiltz for continuing to honor this tradition.  By doing so, we are paying tribute to those brave American soldiers, who started the tradition during WWII,” said U.S. Charge d’Affaires a.i. Casey Mace.

For almost five years under Nazi rule, Luxembourgers were forbidden from celebrating Kleeserchersdag, or Saint Nicholas Day, an important local tradition, especially for children. Therefore, after the liberation of Luxembourg in 1944, the ‘Keystone division’ (28th Infantry Division, today part of the Pennsylvania Army National Guard) stationed in Wiltz could see that the town was in a desperate need for a visit from Saint Nick.

In the winter of 2020, however, Wiltz was unable to hold their American St Nick’s celebration due to the COVID-19 restrictions and this year, the celebration was held on a small scale. 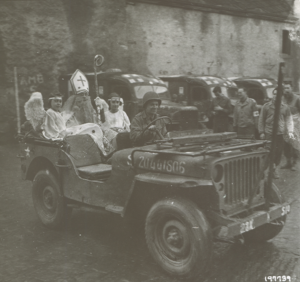