Home Home | News & Events | The United States and Luxembourg sign memorandum on space co-operation on May 10, 2019 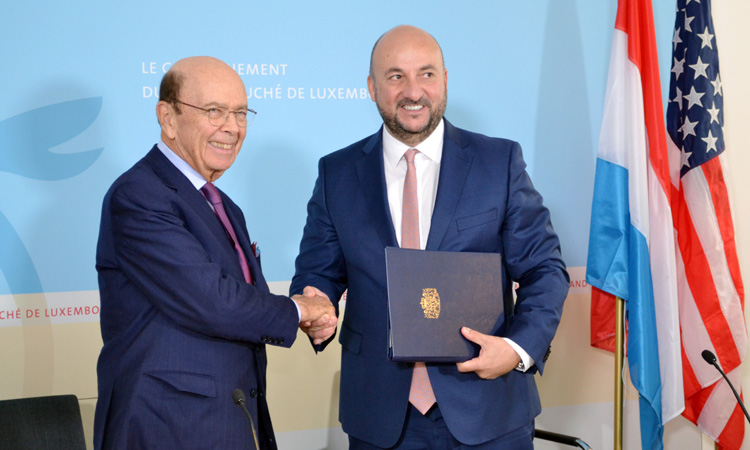 U.S. Secretary of Commerce Wilbur Ross and Étienne Schneider, Luxembourg’s Deputy Prime Minister and Minister of the Economy shake hands after the signing.

Luxembourg, May 10, 2019 – The Grand Duchy of Luxembourg and the United States of America today signed a memorandum of understanding (MoU) that will serve to catalyze and significantly deepen cooperation between the two countries in the field of space. Étienne Schneider, Luxembourg’s Deputy Prime Minister and Minister of the Economy, signed the MoU for the Grand Duchy. Wilbur Ross, U.S. Secretary of Commerce, signed for the United States.

The Memorandum will serve as a vehicle to establish a more formal dialogue, sharing of expertise and exchange of information between Luxembourg and the United States. The MoU will promote the continued growth of their respective space industries through new commercial and investment opportunities, as well as strengthen policy coordination as the two countries lead the international community in promoting a business-friendly regulatory framework. It also aims to strengthen collaboration by identifying projects of common interest, for example in the fields of civil space exploration, science, R&D, earth observation, space situational awareness and communication. Thus, the MoU further facilitates research, exploration, development, and use of space, not only by the two countries governments, but also by research institutes and private sector space companies.

Luxembourg’s Deputy Prime Minister and Minister of the Economy, Étienne Schneider declared: “The Memorandum offers a platform from which both Luxembourg and the U.S. can move forward together on collaborations and projects in space. Similar to the United States, the Grand Duchy is the first European country to offer a legal framework recognizing that space resources can be used. The agreement with the United States is yet another important step forward in enhancing international cooperation through our SpaceResources.lu initiative.”

U.S. Secretary of Commerce Wilbur Ross: “The United States and Luxembourg share a rich history and a common vision of a future in space that is overwhelmingly commercial.  This Memorandum forms the basis for increased collaboration across a wide range of space activities, including research, exploration, defense, and space commerce.  It also allows for partnership on important space problems like regulatory reform and space debris. As such, it covers the broadest possible range of space activities to be undertaken by the two countries as an important next wave of economic growth.”

U.S. Ambassador to Luxembourg Randy Evans stated: “This bold initiative heralds a new chapter in our bilateral relationship.  Few countries are more ambitious than Luxembourg and the United States when it comes to space. By working together, our space companies, scientists, and policy experts will experience even greater growth and more breakthroughs for future generations. It is a tremendous growth area that will serve as the platform for many important things for years to come. Together we each do so much more than apart.”

Joint press release by the Luxembourg Ministry of the Economy, the U.S. Department of Commerce and the U.S. Embassy, Luxembourg.