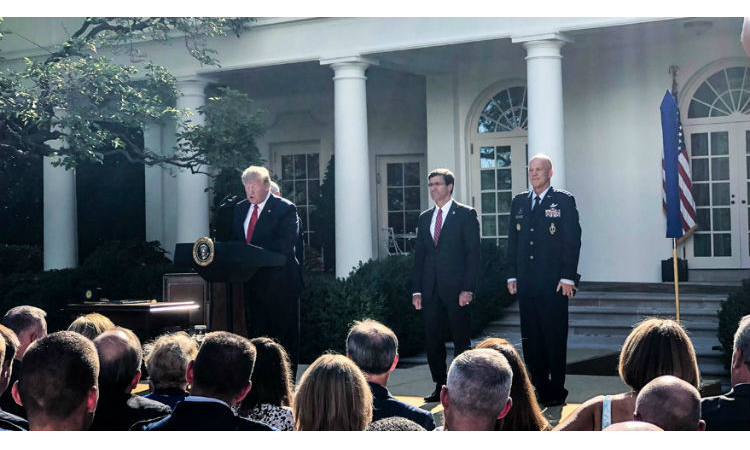 The United States had a U.S. Space Command from 1985 until 2002 when it was dissolved by the George W. Bush administration. Its functions were absorbed by U.S. Strategic Command to free up resources to create U.S. Northern Command to oversee homeland defense.

Trump in a Dec. 18 memo instructed the Pentagon to re-establish a United States Space Command (USSPACECOM) to focus on the protection of U.S. space assets and to strengthen the military’s posture in space as adversaries develop more advanced anti-satellite weapons.

“SPACECOM will boldly deter aggression and outpace America’s rivals,” Trump said on Thursday at a White House Rose Garden event. “Our adversaries are weaponizing Earth’s orbits with new technology targeting American satellites that are critical to both battlefield operations and our way of life at home. Our freedom to operate in space is also essential to detecting and destroying any missile launched against the United States.”

During a meeting with reporters at the Pentagon on Thursday, Raymond said the new command shares the name as the one that was first activated in 1985 but this one is different, as it was designed for an area when U.S. access to space is being challenged. Raymond was confirmed by the Senate on June 27.

Space has become a “vital domain” that is critical to the nation’s security and economy and is no longer a benign environment, Raymond said. The command will have a “sharper mission focus on protecting and defending space assets, will have a stronger unified structure with our intelligence partners and a closer connection to partners and other U.S. warfighting commands,” he said. “Our goal is to deter conflict. The best way is to prepare to fight if deterrence were to fail.” China and Russia currently are regarded as the most likely to pose a threat to U.S. satellites because of their rapid advances in electronic and kinetic weapons that could be used to disable or destroy satellites.

Army Lt. Gen. James Dickinson was selected to be deputy commander of USSPACECOM. He has yet to be confirmed by the Senate.

There will be two key components supporting USSPACEOM: a Combined Force Space Component Command and Joint Task Force Space Defense. The Combined Forces Space Component Command at Vandenberg will be responsible to support military commanders around the world with space services such as GPS-based navigation, space-based data, satellite communications and missile warning. The Joint Task Force Space Defense at Schriever will be co-located with the National Space Defense Center and will be responsible for protecting military satellites on orbit.

Raymond said USSPACECOM will work closely with the National Reconnaissance Office. “The relationship with NRO has never been better,” he said. “We share a concept of operations. We train and exercise together.” At the Aug. 20 meeting of the National Space Council, the acting director of national intelligence Joseph Maguire announced that Space Command and the NRO will form a joint command structure for space operations. For the first time, intelligence community assets wil be under the operational and tactical control of the military during a conflict if U.S. satellites came under attack.

USSPACECOM is one of three major space reorganization efforts by the Defense Department. In March DoD established a Space Development Agency to help design a new space architecture taking advantage of commercial technology. The third leg is the establishment of a separate military service for space, which requires congressional authorization and a revision of Title 10 of the U.S. Code that governs the U.S. armed forces.

Defense Secretary Mark Esper on Wednesday said the establishment of the United States Space Command is the “next crucial step toward the creation of an independent Space Force as an additional armed service.”

USSPACECOM’s new logo and other information will be posted on its website spacecom.mil