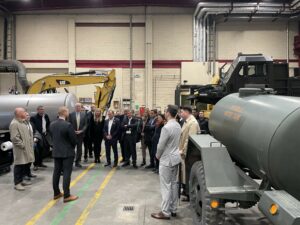 The WSA, established by the Government of Luxembourg, provides critical storage and maintenance facilities supporting NATO, U.S. Air Forces in Europe-Air Forces Africa (USAFE-AFAFRICA), and U.S. Army operations. WSA maintains, repairs, and stores military materials and equipment for rapid worldwide deployment within 24 hours for any contingency.  No weapons are stored in the facility.

Fernand Etgen, President of the Chamber of Deputies of Luxembourg said: “In Luxembourg, we feel honored to host the WSA and thus to contribute to supporting our Allies and friends. Notwithstanding the many other good examples of our bilateral cooperation, the WSA represents a concrete expression of the excellent partnership between the US and our country. Russia’s illegitimate aggression against Ukraine has proven the necessity to further deepening the cooperation between the NATO-Allies and to adapt the current Strategic Concept of the military Alliance in order to reflect the new challenges.”

U.S. Ambassador Thomas Barrett commented: “I am grateful to the government of Luxembourg for the critical support the WSA provides to the United States Air Forces. This facility is one example of the multifaceted defense cooperation between the United States, Luxembourg, and NATO, and this demonstration of Luxembourg’s contribution to NATO’s collective defense is an important step towards meeting the formal commitment all NATO members, including the Grand Duchy, made at the 2014 Wales Summit to meet the 2% defense spending guideline.”

During the visit, the members were briefed on the strategic importance of the WSA complex to U.S. and NATO operations and received a tour of the facilities demonstrating the extensive equipment stored and maintained on site. 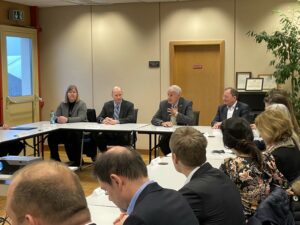 The Warehouse Service Agency (WSA) was established and designated by the government of Luxembourg to perform the services set forth in a memorandum of understanding between Luxembourg and the United States dating back to December 1978. The U.S. Air Force established the Central Region Storage Facility (CRSF) in 1994 and oversees WSA site operations.

Located in the city of Sanem, Luxembourg, the facility provides warehousing, logistical support and maintenance services for military equipment, goods and merchandise and currently serves the 86 Materiel Maintenance Squadron of the U.S. Air Forces in Europe (USAFE).

WSA maintains, reconstitutes, and stores WRM in a posture to rapidly deploy worldwide within 24 hours for any contingency.

In 2020, responding to a request by the Government of Luxembourg, the U.S. Air Force provided power generators and refrigeration units from the WSA facility to the Luxembourg Army to support Luxembourg’s temporary field hospitals in the fight against the COVID-19 outbreak.

The WSA facility provides over 200 jobs to the Sanem and Luxembourg community and significantly contributes to local hospitality economy (estimated 300,000 EUR annual local investment)  with large numbers of regular U.S. and NATO military visitors to the site.

For more information, please contact the Public Affairs section at the U.S. Embassy in Luxembourg at +352 46 01 23 21/ 24 or at LuxembourgPublicAffairs@state.gov