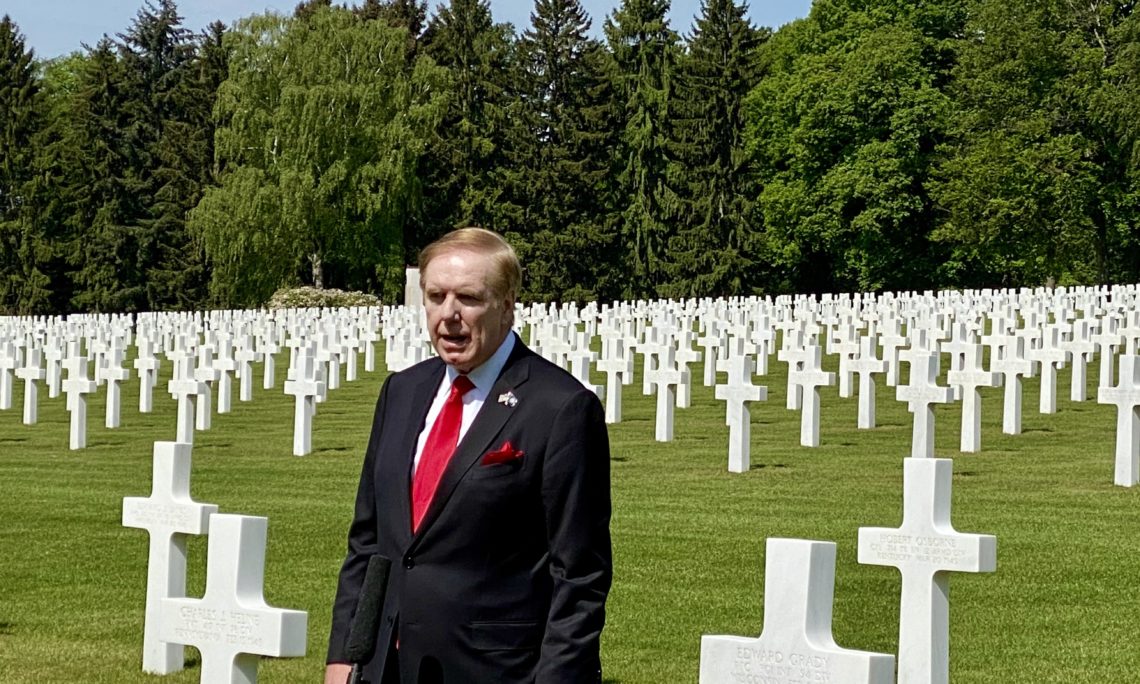 Hello, my name is Randy Evans and it is my distinct honor and privilege to serve as the 23rd United States Ambassador to the Grand Duchy of Luxembourg.

We are here at the Luxembourg – American Cemetery in Hamm, Luxembourg where over 5,000 members of the United States Armed Services rest in peace.  General George S. Patton is here with us – just a short distance from the City of Luxembourg which served as the headquarters for his Third Army.

This day – May 8, 75 years ago, served as a brief moment of reflection for a world embroiled in a global war that threatened the survival of life as we had known it.  It is thus only appropriate on this day we too take a moment to reflect, as we, in some ways, find ourselves again in a war to defeat an enemy so that the generations that follow us can enjoy fully life, liberty, and the pursuit of happiness that we have enjoyed.

Seventy-five years ago, on this day, many came together around the world to rejoice in Nazi Germany’s unconditional surrender on May 7th – the preceding day. Yet, the war was far from over.  Indeed, the end of the war was still months away and the political, societal, social, and economic costs of the Second World War would take generations to fully recover.

But May 8, 1945 was nonetheless an important moment – a critical time to just take note of the six years of conflict costing millions of lives, destroying homes, families, and communities and threatening our very way of life.

Although it was Victory in Europe Day, in reality it was far from Victory in the World Day or even just a celebratory victory especially for those who had lost so much.  Many rest here in this Cemetery, having lost their lives before even knowing the outcome of the war in Europe that had cost them their lives and futures.

Others were like my wife Linda’s uncle Richard LaFrance, who was wounded shortly before VE Day, and returned blind to live a life very different than he had planned with his wife Betty Lou.  He was a First Lieutenant working a tank battalion.  For his sacrifice, he received the Bronze Star, three Battle Stars, and a Purple Heart.  But, none of these distinguished decorations brought his sight back.  Yet, he went on to make the most of life with four beautiful children and serving as a mentor and athletic trainer to many fine young athletes at Cornell University in upstate New York.

Two of his 714th tank battalion mates were not so fortunate.  They remain here, with me, buried side- by-side at our Cemetery.

Yet, on May 8, 1945, with the war raging on, the pain of their lost lives and many more, and the many wounds and scars that war leaves behind, there remained reason to pause to recognize that something important to us all had happened.

The Nazis had thrown everything they had at us and we persevered.  We never gave up.

It is a little like that today and it is why I felt that it was so important to take this moment to do the same – to pause for a moment bigger than all of us.

You know, at 3:00 p.m. on VE Day, British Prime Minister Winston Churchill announced on a national radio broadcast the Nazi surrender ending the war in Europe.  But, as Prime Minister Churchill did so, he was very careful to note that the war was far from over and many challenges still lie ahead.  He said:

“We may allow ourselves a brief period of rejoicing; but let us not forget for a moment the toil and efforts that lie ahead.”

Like those 75 years ago, it is impossible to truly ‘celebrate’ today amidst such pain, suffering, and death.  But, to ignore such sacrifice as we begin to finish that which we began – to defeat this virus – the Coronavirus or COVID 19 – and to liberate the world from its scourge would be to ignore just how far we have sacrificed and have come.

Thanks to the courage of so many, and the risks assumed and sacrifices made by those on the healthcare front line, including especially doctors, nurses, essential workers, and so many, many more, we are indeed making progress as we ‘flatten the curve’ and advance toward a cure or vaccine.

As we push forward toward the return of a safe life, with the liberty for all to enjoy life, and the unfettered right to pursue happiness, we can now, as others did 75 years ago, we must not only pause and not only recognize how far we have come, but also how far we must still go.

Just like these men around me when they made the ultimate sacrifice, none of us now know how this all will end.  But, end, it must, and end, it will.  And when it does, let us look back on this day as the day when we both took measure of what prior generations had done, and the sacrifices we ourselves have made to achieve our own victory over the invisible enemy that threatens us today.

Like those from the generation here with me, we must ourselves be determined, disciplined, and unrelenting in our cause.  On behalf of the people of the United States, and as the Ambassador of the Grand Duchy of Luxembourg, all I ask is that we take measure of where we have been, where we are, and where we are going – life, liberty, and the pursuit of happiness.

May God bless you and your family, the Grand Duchy of Luxembourg, and, my home, the United States of America.