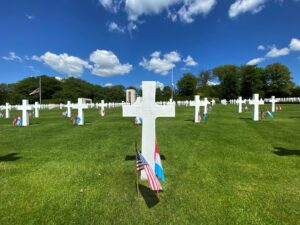 On May 29, at the American Battle Monuments Commission’s Luxembourg American Cemetery in Hamm, U.S. Embassy Luxembourg, including the Marine Security Guard, and guests paid tribute to the men and women who died while in the military service of their country.

As Chargé d’Affaires Casey Mace noted in his remarks:  “Memorial day is above all, a day of remembrance.  A day for us all to take a moment to remember, to honor, mourn, and celebrate the soldiers who gave their lives -the ultimate sacrifice- in the name of the freedom we enjoy today.”  He highlighted the stories of three soldiers honored at the cemetery: Lieutenant Sydney Prince Kelly of Mobile, Alabama, who remains missing in action; Private First Class Donald Mangan of Elkton South Dakota, whose remains were identified in 2019; and Private First Class Philip Warren Weis of Sartell, Minnesota, a Luxembourgish American who died less than ten miles from his Grandfather’s home.

Chargé Mace was joined by Cardinal Hollerich of The Luxembourg Diocese, who gave the invocation, United States Army Africa Command General Stephen J. Townsend; Minister of Education, Children and Youth, Minister for Higher Education and Research Claude Meisch on behalf of the Government of Luxembourg; and a prayer of Remembrance was given by Mr. Didier Schraub of the Jewish Consistory of Luxembourg.