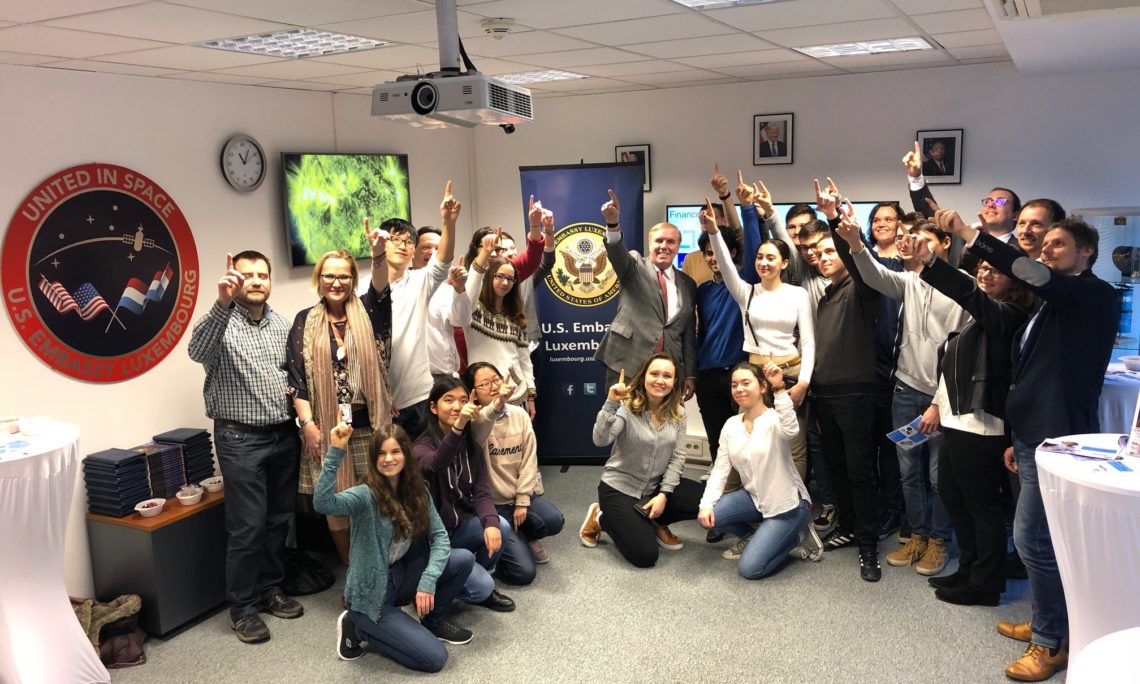 Today, the United States Embassy introduced its newest addition – SpaceNex.  In honor of the 50th Anniversary of Landing on the Moon, and the expected new joint cooperation agreement with the Grand Duchy of Luxembourg, the Embassy welcomed the next generation of scientists, thinks, inventors, and explorers from Scienceteens Lab and the University of Luxembourg.

As part of the event to showcase the Space Annex or “SpaceNex”,  Ambassador Evans officially announced a U.S. Embassy grant in support of the University of Luxembourg’s SCIENTEENS LAB. The Ambassador was joined by Dr.Philippe Lamesch, Head of the Office for Fundraising at theUniversity of Luxembourg and Dr. Maren Kruger, founding member of the Scienteens Laboratory. The Embassy grant will help fund a week long intensive Scienteens Lab Academy focused on systems biomedicine set to take place from July 8 – 12, 2019.

The SpaceNex will showcase the United States’ ongoing commitment to space exploration, scientific discovery, and promoting closer commercial, scientific, and educational ties to partner nations like Luxembourg. The SpaceNex facility hosts a virtual reality system equipped with designed to focus on space exploration including a simulation of the Apollo 11 moon landing, artifacts from past NASA missions, images from the Hubble telescope, and live video feeds from the International Space Station and the NASA channel.

In his remarks, Ambassador Evans said:  “The world today offers so many opportunities to cooperate, learn, and grow by working together.  It is why the theme of our new program features the United States and Luxembourg flags with the motto ‘United in Space.’” The Ambassador added, “When you look to the stars, no matter who you are with, you are looking away from contentiousness and adversity, and all of those things that tend to divide us and look towards something that should unite us.”