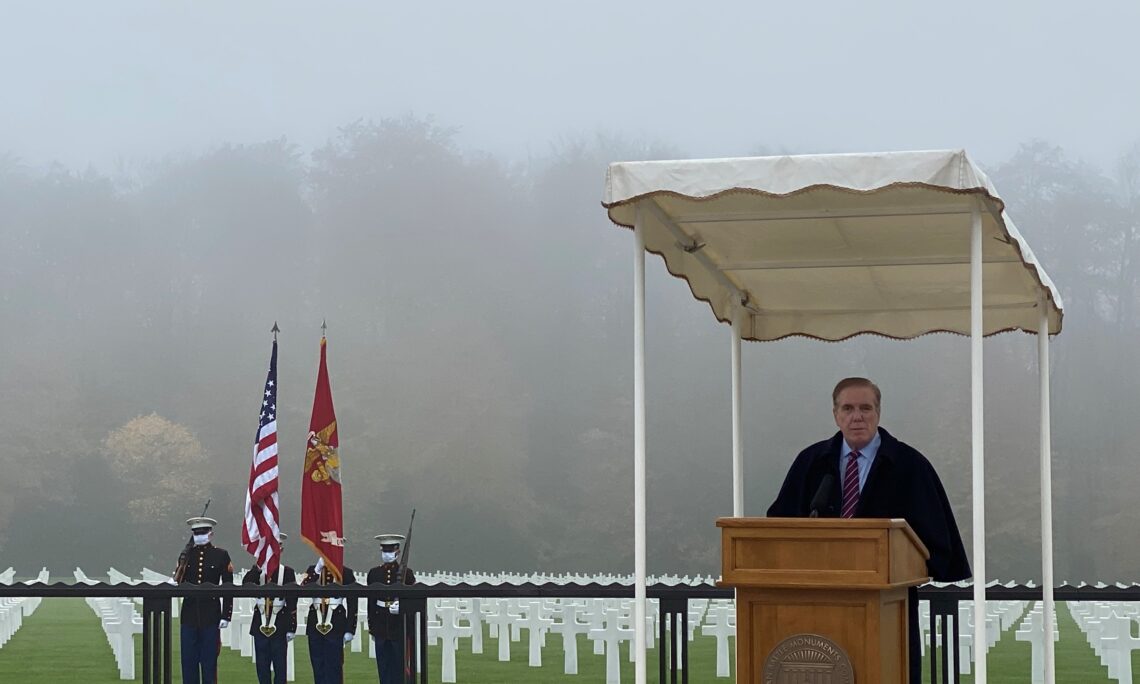 Today marks the official celebration of Veterans Day in the United States, celebrated in Europe as Armistice Day.  In the U.S., this national holiday has evolved to celebrate not only the end of the World War I, but to honor those brave men and women who have served in the U.S. Armed Forces, both living and dead, at home and overseas in places like Luxembourg, who ensure the peace and freedom of millions of citizens around the world.

In respect of the current COVID-19 social distancing restrictions for public gatherings, a virtual ceremony was held to celebrate Veterans Day at the Luxembourg American Cemetery in Hamm by United States Ambassador to the Grand Duchy of Luxembourg J. Randolph Evans, who said:

“Attending with us virtually are countless Veterans and their families who join us in taking this moment to honor and recognize Veterans, living and deceased, who have stepped forward to risk everything so that we, and countries like the Grand Duchy of Luxembourg, might be free. To all of them, and those with us here, and those with families who have lost a loved one, I ask that you salute, in your living room or in the kitchen, or wherever you are, and let us say “thank you for your service to our country.”

The people of the Grand Duchy of Luxembourg should know that there has been no greater honor bestowed upon me than to serve as the 23rd United States Ambassador here.  I am honored and blessed to have the chance to reflect on our sacred past with the profound belief that, in doing so, together we are building a brighter, more peaceful future. My time in Luxembourg has given me so many other wonderful opportunities to not just reflect on our past but also to work toward better futures that leave our peoples, countries, and the world in a better place to cope with the challenges of the future.  For this opportunity, I am eternally thankful.”

Thank you to all who joined us for the commemoration; several hundred people from around the world have viewed the video on Facebook, and we invite you to do the same on Veterans and Armistice Day to honor those veterans, both living and deceased, who have worked to maintain our freedom.

The video of the ceremony can be found on the Facebook.