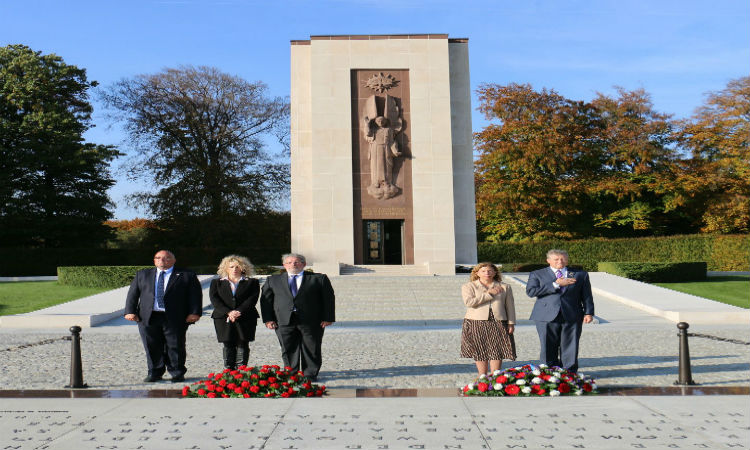 The Committee members visited the Luxembourg American Military Cemetery and Memorial in Hamm. Together with Mr. Rob DALESSANDRO, Acting Secretary of the ABMC (American Battle Monuments Commission, an agency of the Executive Branch of the Federal Government of the United States administering American Military Cemeteries around the world), Mr. John WESSELS, Deputy Secretary of the ABMC Overseas Operations, H.E. Mr. Mars di BARTOLOMEO, President of the Luxembourg Chamber of Deputies, Mr. Marc ANGEL, MP and Chairman of the Foreign Relations Committee of the Chamber of Deputies, Ms. Claudia DALL’AGNOL, MP and Chairwoman of the Committee of Public Authority.

The Members of Congress and the representatives of the Luxembourg Chamber of Deputies laid wreaths in honor of the 5,076 U.S. soldiers, including General Patton, buried in Luxembourg American Cemetery.

Chairman – Representative Charlie Dent, Republican from the Commonwealth of Pennsylvania representing the 15th district which includes the cities of Allentown, Bethlehem and Hershey. First elected in 2004, Congressman Dent is serving in his 7th congressional term. In addition to chairing the MILCON-VA subcommittee, Congressman Dent also serves on the State and Foreign Operations and Housing and Urban Development Appropriations subcommittees.

Ranking member – Representative Debbie Wasserman Schultz, Democrat from the State of Florida representing the 23rd district which includes parts of Broward and Miami-Dade counties along with the cities of Fort Lauderdale & Miami Beach. First elected in 2004, Congresswoman Wasserman Schultz is serving in her 7th congressional term. In addition to her service on the MILCON-VA subcommittee, the Congresswoman also serves on the Energy & Water and Legislative Branch Appropriations subcommittees.