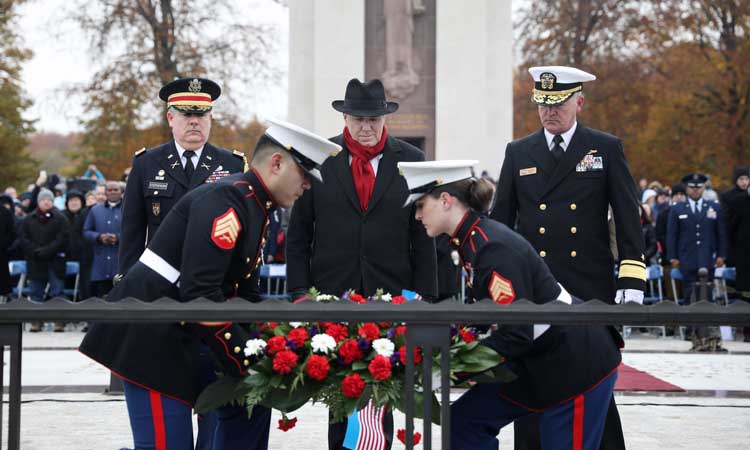 Veterans Day in Luxembourg was celebrated at the American Cemetery in Hamm, Luxembourg, which is one of 26 overseas American military cemeteries managed by the American Battle Monuments Commission (ABMC).

The community joined Ambassador Randy Evans and his wife Linda, the Chief of Staff for U.S. Naval Forces Europe, U.S. Naval Forces Africa, and the U.S. Sixth Fleet, Rear Admiral Matthew Zirkle, leadership of the 52nd Fighter Wing based in Spangdahlem Air Base, Colonel Timothy Trimmel and Command Sergeant Major Stephanie Cates, as well as U.S. Veterans Friends of Luxembourg and the Patton Alliance Foundation to honor our Veterans.

Wreaths to honor veterans were laid by Ambassador Evans, Rear Admiral Zirkle, and Colonel Stephenson on behalf of the citizens of the United States of America; Colonel Trimmel and Command Sergeant Major Cates on behalf of the U.S. Armed Forces; Mr. Constant Goergen representing the U.S. Veterans Friends and Mr. Joseph Braun, a Luxembourgish veteran of the Vietnam conflict who served in the U.S. Special forces, to honor all U.S. Veterans; Mr. Timothy Lone on behalf of the Patton Foundation, and Jacob Thelin, the Assistant Superintendent of the American Battle Monuments Commission and an Army veteran himself.

At the conclusion of the event, the ABMC marked the identification of the remains of Private First Class Donald E. Mangan who was Missing in Action since September 17, 1944. A small bronze rosette was placed next to his name on the Wall of the Missing to signify he was finally returning home.

The Ambassador and the community are honored to celebrate the sacrifices and service of our great Veterans and to take the time to reflect on our sacred past to build a brighter more peaceful future.

A link the photos can be found here: https://flic.kr/s/aHsmJjEotU