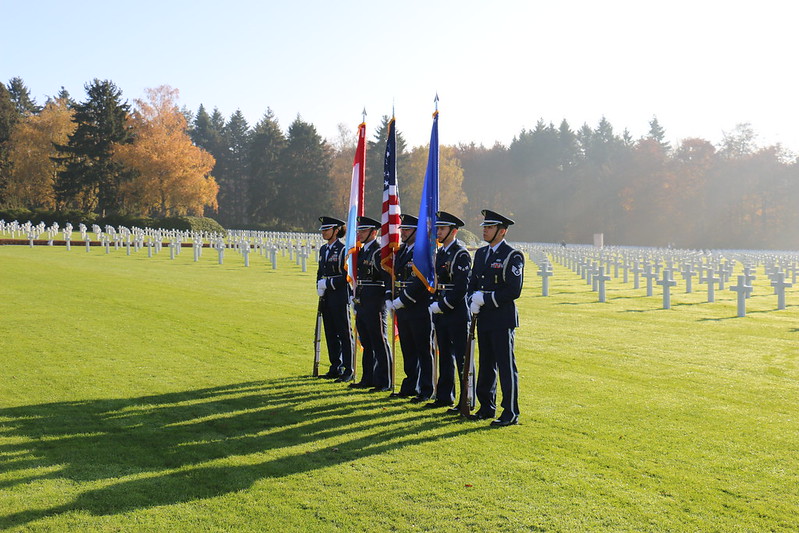 A ceremony to celebrate U.S. Veterans Day was held on November 11, 2021 at the American Battle Monuments Commission Luxembourg American Cemetery in Hamm.  This was the first event fully open to the public hosted by the Embassy since the onset of the pandemic and followed current Luxembourg COVID guidelines.

The event was attended by:

In the U.S., Veterans Day celebrates not only the end of the World War I, but also honors those brave men and women who have served in the U.S. Armed Forces in the past, present and future, at home and overseas— also in places like Luxembourg, to ensure the peace and freedom of millions of citizens around the world.

“At the 11th hour, of the 11th day, of the 11th month, each year, we come together to honor the veterans of the United States Armed Forces.  We do this to demonstrate our everlasting appreciation for the selfless service of these men and women and show that we will always remember their courage and sacrifice made in the name of peace and democracy.’

“While we can never repay the sacrifice those that have served have made, both the United States and Luxembourg make an ultimate effort to honor it. Together, by remembering, we help safeguard what generations have given everything to secure and together, we help ensure that the generations after us, carry on the same path.”

For more information please contact the Public Affairs section at the U.S. Embassy in Luxembourg at +352 46 01 21 or ext. 24 and via email at:LuxembourgPublicAffairs@state.gov